The girl in Sierra Leone

Health gap widens between the poorest and the rest 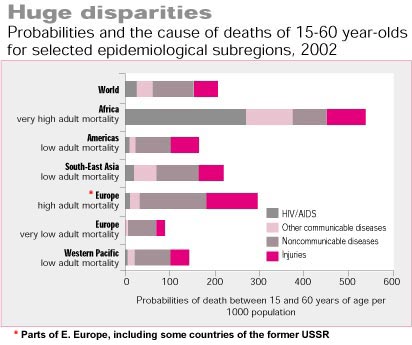 • A girl born in Japan today may live till she is 85, but another born in Sierra Leone can expect to live only 36 years

• Despite global gains, in 2002, while life expectancy at birth reached 78 years for developed country women, it fell to less than 46 for sub-Saharan Africa men

• At six, the Japanese girl would be immunised against diseases like measles, diphtheria and polio but not the girl in Sierra Leone. Three out of 10 of her friends would have died from those diseases before turning five


• 98 per cent of the 10.5 million under-five child deaths in 2002 were in developing countries and 35 per cent of Africa's children are at higher risk of death today than a decade ago

• If both girls develop chronic diseases with age, the Japanese will receive good treatment, rehabilitation and medications worth about us $550, but the girl from Sierra Leone will get only us $3 of medicines resulting in her death prematurely

• Due to a fall in adult mortality in low-mortality regions coupled with a rise in high-mortality areas, the mortality gap has widened between the regions to 340 deaths per 1000 in 2002. Mortality rates in parts of Africa are higher than 30 years ago

• For the girl in Sierra Leone to have the same chance of a healthy life as in Japan would need scaling up of healthcare systems, which equitably provide access to quality services for acute and chronic diseases, effective disease prevention services and are able to respond to new threats