The good that smoking does

Studies suggest smoking protects against diseases such as Parkinson's and Alzheimer's, but many scientists and funding agencies are not convinced. 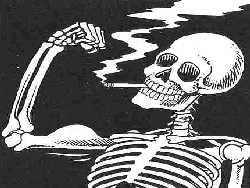 IN THIS age of the media, images are too quickly ingrained into popular imagination. If someone were to tell you that smoking, which has been shown to cause heart disease and lung cancer, may protect against disease, then you would surely think the person is either a fag-fanatic or downright stupid. But there is an element of truth in the claim.

Evidence is now growing that smokers may be less likely than non-smokers to get progressive brain disorders such as Parkinson's disease and Alzheimer's disease, ulcerative colitis, rheumatoid arthritis and some cancers (New Scientist, Vol 140, No 1894).

Reports on the positive effects of smoking have been trickling in since the late 1960s. For instance, American military veterans suffering from Parkinson's disease were found less likely to be smokers. Despite other findings to the contrary, evidence suggests smokers are half as likely as non-smokers to develop this disease.

Caroline Tanner at the California Parkinson's Foundation in San Jose, hints that something in cigarette smoke protects against environmental toxins that, some scientists believe, trigger Parkinson's.

The most consistent finding of a reduced risk in smokers has been in case of inherited Alzheimer's disease. Says Peter Whitehouse, director of the Alzheimer's Centre, University Hospitals of Cleveland, Ohio, "There is something in nicotine that directly relates to the manner in which brain cells die. It's not just supporting the cells that are still there...but preventing the cells from dying in the first place."

Another theory that could explain this preventive effect stems from the relationship between nicotine and acetylcholine, a chemical that relays impulses from one brain cell to another. Acetylcholine stimulates two types of "receptors" on these cells, nicotine being one of them. Nicotine has the added effect of increasing nicotinic receptors on brain cells. When researchers found Alzheimer's patients had depleted numbers of acetylcholine receptors in their brains, they wondered if nicotine's role may not stop brain function from deteriorating.

However, adequate research is not being carried out to test these theories, feel researchers. For this neglect, they blame the anti-smoking bias that has also tarnished the reputation of nicotine. Many researchers have had their grant applications turned down because of this "prejudice". Says Graham Cope, a researcher at the Wolfson Research Laboratories in Birmingham, UK, who has worked on ulcerative colitis, "There is a glaring lack of desire to investigate these anomalies, because people do not want to be seen as promoting smoking in any way."

Critics, on the other hand, are quick to point out the inconsistencies in the epidemiological evidence. For example, not smoking could be an early symptom of Parkinson's, says Niall Quinn of the Institute of Neurology in London. Likewise, people who develop Parkinson's may be genetically predisposed to the disease that also makes them less likely to smoke.

Drug companies, too, have been slow to follow up the epidemiological evidence. For one, nicotine is an unattractive drug for them. "The whole subject of smoking and what nicotine does to the brain goes into the realms of drug abuse," says Elaine Perry, a nicotine-researcher at the Newcastle General Hospital, UK.

Nevertheless, inconclusive evidence and scientists' bias may not hinder pro-nicotine research for long. Brain researchers have shown that if you administer nicotine to a damaged animal brain, it recovers much faster. "This backs up the notion that nicotine prevents the degeneration in Alzheimer's," says Perry.