The good, the bad and a few uglies flow 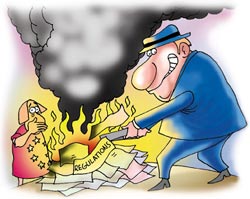 Between the idea and the reality falls the shadow. Despite its stringent environmental regulations, the European Union (eu) reports more failures than successes. So far only activists were crying foul, but now the offence is official. The annual report for 2003, released by the eu's executive arm, the European Commission (ec) last month, names Fance, Greece, Ireland, Italy and Spain as the worst offenders. The most serious shortcomings in implementing the laws were in the areas of water, waste, nature protection and environmental impact assessments.

According to the 2003 survey, when eu environmental directives were sought to be made part of law in a member state, in 88 cases it didn't happen in time and in 118 others they were incorrectly incorporated. Both ways, France led the defaulting pack. While cases of non-compliance of regulations were highest in the case of directives on clean air, chemicals and biotechnology, incorrect incorporation occured in waste and water management. These two areas also accounted for the highest number of cases -- 95 in all -- wherein members did not meet "secondary" obligations, such as deadlines for presenting certain plans or designating protected areas. Here, Ireland was the leading violator.

So is the ec going to take action against the truant states identified in the Fifth Annual Survey on the implementation and enforcement of eu environmental law ? No, it seems. Excuse given: taking a state to the European Court of Justice is too time-consuming a procedure. Instead, the eu intends to offer "technical assistance" and help nations implement laws and work closely with officials at the national level. Of course, there have been cases wherein the ec has taken member states to court. In 2003, the court condemned Italy and uk and in another case, it hauled up France. Denmark, Sweden and Finland turned out to be the best performers.