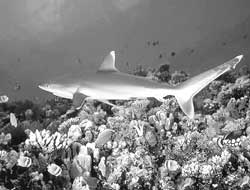 the biggest coral structure in the world might be threatened very soon. The Australian government has left the option of future oil drilling open near the Great Barrier Reef. tgs nopec Geophysical, a Houston-based multinational company, has recently proposed to carry out exploration for oil near the world heritage area off the Queensland coast. Instead of rejecting the proposal as expected by conservationists, the country's environment minister Robert Hill has called for an environmental impact study. This has enraged many. "Hill's response will disturb millions of Australians who oppose the very notion of mining or exploration on or anywhere near the Great Barrier Reef," said Nick Bolkus, Shadow minister for environment. According to him, Hill is intentionally not acknowledging the disastrous impacts of drilling. Environmentalists allege that any drilling near the park would prove to be fatal for the endangered corals. "This ecosystem suffers from a range of human threats and any drilling adjacent to them would pose an additional major danger," said Simon Cripps, a marine pollution expert. Even 92 per cent of the Australian public is overwhelming opposed to the proposal, indicates a survey.