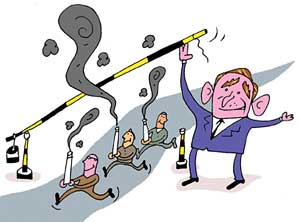 Bush hurries to give industry a parting gift: licence to pollute

By the time Barack Obama takes charge as US president on January 20, his predecessor George W Bush would have weakened a number of environmental rules. Bush is known for his anti-environment policies, and his team is working overtime to unbound industry of environmental regulations. According to The Washington Post, 90 new rules are in play.

Some of the finalized and proposed changes involve getting animals off the Endangered Species List, loosening regulations for factory farm waste, speeding up oil shale development across eight hundred thousand rocky hectares in the west and making mountaintop coal-mining easier.

Rules come into effect 30 to 60 days after being finalized. If they have not come into effect when Obama takes up office, he can reject them. But if they come into effect it will be very difficult for him to reverse them; it will require the intervention of the Senate, a cumbersome process.

These changes are part of a long thought-out strategy by the Bush administration. In May 2008, the White House chief of staff issued a memo asking regulatory agencies to put together proposed changes in rules by June 1. Several changes in rules were finalized in November and December (see box: To-undo list).

Known as midnight regulations, the rules are being hurried without the usual checks and balances. Even citizens are cut out of the process. Take, for example, the interior department rule that takes away the protections for endangered species in favour of mining interests. It drew more than 300,000 comments from the public, which officials reviewed in about a week and finalized the rule on December 11. Usually, it takes months to review public comments.

"They clearly made a predetermined decision to issue it no matter what the public comments," said Andrew Wetzler, the director of the endangered species project at the Natural Resources Defense Council, an environmental action group.

According to Rick Melberth, the director of the Federal Regulatory Policy omb Watch, which monitors the White House Office of Management and Budget, through which the proposed regulations must pass to be effective, Bush is rushing several of the rules to completion so that Obama cannot easily overturn them.

Under federal rules, it takes 60 days to enact an economically "significant" regulation, which carries an estimated impact of $100 million or more; other regulations take 30 days. The administration declared most of the changes "insignificant regulations". The process has moved especially on fast track in case of oil shale. In July, the administration proposed rules that would lead to leasing more than eight hundred thousand hectares of public land in Colorado, Utah and Wyoming for oil shale extraction, despite contention that power and water are scarce in the region. These rules are likely to be signed by Bush before Obama is sworn in.

The changes in the Endangered Species Act by the US Fish and Wildlife Service would give any government agency the authority to approve projects that could harm rare and threatened wildlife or their habitat. A rule recently finalized does away with the 35-year-old practice of mandatory review by independent federal scientists.

The Bush administration also tried to relax limits on pollution from power plants, despite opposition within the Environmental Protection Agency (epa), but abandoned the plan in the face of protests by public interest groups. According to epa's estimate, relaxing the limit would allow millions of tonnes of additional carbon dioxide into the atmosphere annually, hastening global warming.

A related regulation, which was also dropped, proposed to ease limits on emissions from coal-fired power plants near national parks. Another rule would allow increased emissions from oil refineries, chemicals factories and other industrial plants with complex manufacturing operations.

When it comes to declaring carbon dioxide a major pollutant as announced by US supreme court, the Bush administration has shown no hurry. Obama will have to undo the changes made by Bush for its much-talked-about climate legislation to have an impact.