Under pressure from the Supreme Court, the Delhi government resorts to a five-day charade to clean up the Yamuna 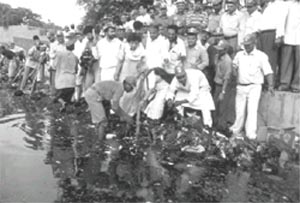 the Delhi government's recent drive to clean up the Yamuna was an unexplained ritual, more to create drama than to serve any real purpose. Citizens were called upon to clean the sewer river, while 18 sewage lines continued to pump waste into the capital's lifeline.

"This is a first-ever programme to clean the river and make the people aware of the existing river pollution problem," claimed Shiela Dixit, Delhi's chief minister who led the drive. But for others the drive was just another drama to camouflage a serious problem. "How can the government generate public awareness about the Yamuna when it doesn't even know how to clean it?" asks R C Trivedi, a senior scientist with the Central Pollution Control Board ( cpcb) . "The government is fooling the people. The campaign is a sham," says Anupam Mishra, an environmentalist and head of the Gandhi Peace Foundation.

Experts feel that the Delhi government's clean Yamuna drive has more to do with a recent Supreme Court's ( sc ) order. On April 10, 2001, the apex court asked the Delhi government to clean up the river by March 31, 2003. But as is the case with most court orders, the state government has been dragging its feet. "If the government wishes to meet the deadline, it should try and find a solution to the problem of sewage," says Sureshwar D Sinha, chairperson of Paani Morcha, a New Delhi-based non-governmental organisation ( ngo ). "This drive may just clean the banks, but will make little difference to the river," he adds.

The drive, in fact, began with lot of enthusiasm with volunteers flooding the river on the first day. But as the days went by, the enthusiasm waned. "Cleaning the river in just a few days is impossible," says Trivedi. By the fifth day, the Municipal Corporation of Delhi ( mcd) had fished out 36 truckloads of waste. The waste consisted of plastic bags,coconuts and hospital waste from Delhi's numerous hospitals. For the health minister A K Walia, it was an occasion to score a political point. "The hospital waste was dumped before our government came to power," he said.

Experts feel that the government is clueless on how to check the sources of pollution in the river. There are around 18 sewer drains and the river receives 240 tonnes of biological oxygen demand ( bod ) waste every day. So the removal of 30-40 tonnes of bod cannot improve the water quality of the river. "The zeal to clean the river is lacking in the officials. The voluntary work by some ngo s and the residents cannot save it," says Mishra.

The Delhi government has never bothered to explore the feasibility of a number of proposals to clean the river. The cpcb proposed to build a 22 km-long channel along the river from Najafgarh drain to Shahadara drain to transport sewage for agricultural purposes, thus keeping Yamuna free from sewage discharge. "The government has not considered the proposal citing a financial crunch," says Trivedi. The government says that this proposal will cost Rs 1,000 crore. But it spent Rs 500 crore to install the 16 stp s without the necessary infrastructure. "Since its inception, the government has been dependent on loans from Japan to implement the Yamuna Action Plan. When will they find a permanent solution to the problem?" asks Trivedi.

Yamuna's worst problem is its non-existent flow of water. "Yamuna's water quality will improve only if we assure a minimum flow of water," says Trivedi. According to cpcb , the river needs to be diluted ten times to its present condition and this will be done with release of water with minimum flow. Even the sc had asked the Haryana government to release water, but till today this has not happened. The minimum water flow needed to clean the river is 25,000 milion litres per day (MLD). but only 900 MLD is available now.

The government claims that its five-day drive is bringing the river back to life. "We have understood all the problems and after thorough study we have decided to set up 15 STPs," says Walia. But few are convinced.