The guests who came to kill

A new study suggests that the more the number of hosts a parasite feeds on, the more virulent it becomes 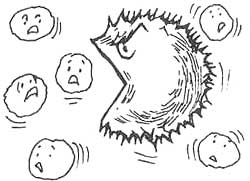 MEDICAL wisdom has it that parasites evolve to become less harmful to their hosts. For if they became more virulent and killed off their hosts, they would be terminating their own lives, too. But, a recently published 10-year field study of the relationship between Panama's fig wasps and roundworms that parasitise them found no evidence of time's benign influence on the roundworms (Science, Vol 259, No 5100).

Allen Herre, who conducted the study at the Smithsonian Tropical Research Institute station in Panama, says his work supports the heretical Darwinian view of medicine -- the easier it is for a parasite to find new hosts, the more virulent it is likely to be.

Herre found that in some species of fig wasps, many females lay eggs in the same fig providing the roundworms ample opportunity to escape the original host and infect the offspring of another. The result was that the infected wasps produced significantly fewer offspring. From an evolutionary standpoint, explains Herre, the hosts' offspring count is the most relevant measure of a parasite's virulence -- the more virulent the roundworm, the fewer offspring the fig wasp will produce.

Earlier, Jim Bull and his colleagues at the University of Texas at Austin found that when they infected the bacterium Escherichia coli with a virus, the latter quickly evolved to be more benign, producing fewer toxins if it had just one host as company. But when it was introduced to several bacterial hosts, it once again became more virulent.

The two studies have important practical and theoretical implications. If the proponents of Darwinian medicine are right, decreasing disease transmission rates can not only stop the spread of infectious human diseases, it can also decrease their virulence.