Indian scientists suspect the presence of hantavirus - one of the. most dreaded killers of modern times - in Gujarat 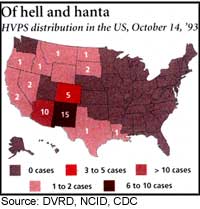 THE mysterious, rodent-borne hantavirus, considered the third most lethal one after rabies and AIDS, has so far been unknown in India. But it Is quite possible that it might be lurking around in Gujarat which was hit by plauge 1994.

Scientists at the National. Institute of Virology (NIV), Pune, have found antibodies against the virus in humans - in Gujarat and the Andaman & Nicobar (A&N) islands. Says NIV director Kalyan Banerjee, "If the anti- bodies are there, the virus must exist. It is like if the smoke is there, fire must. exist."

Banerjee opines that the antibiotic Ribavirin can reduce the illness period and mortality rate. us army scientists have developed a vaccine against the virus, using the genetically tailored vaccinia virus (also used against smallpox), but it is yet to be successfully tested.

Hantavirus infection cues were first recorded in the West among us soldiers of the 1950 Korean War, who suffered haemorrhagic fever with renal syndrome (14FRS). But the virus remained unidentified till the late '70s. It erupted suddenly in southwestern US in May 1993, causing the hantavirus pulmonary syndrome (Hvps), killing most patients within a week, as plasma from blood leaked out and choked their lungs.

Reportedly, preliminary tests in the us suggest, that 15 per -cent of the carrier - the deer mice (Peromyscus maniculatus) - have already been infected by the disease which spreads, with a vicious rapidity. Newsweek,,(Mhy 22, 1995) put the total number of infected cases in the us at 106, half of them being fatal.

But scientists at the Indian '93 Council of Medical Research assure that there is no reson to panic as no cases have been reported so far. Says virologist A C Banerjee of the National Institute of Immunology (NII), "We have adequate facilities to diagnose hantaviral diseases. And antibodies are available."

Scientists say, the dreaded virus - negative-stranded RNA virus belonging to the family Bunyas4ridae - spreads through the air, passed on from the urine of rats and mice. Ironically, Indian scientists are not even sure about which species of the hantavirus has produced the reported anti-bodies in Gujarat and the A&N. Says Banerjee, "We have to work intensively on this subject to get an answer."

According to the World Health Organization, autopsies suggest that the virus penetrates deep into the patient's lungs and nests in the lining of tiny capillaries, where carbon dioxide is exchanged for oxygen. Soon, the blood vessels begin to rupture, their walls leaking plasma.

The unprecedented 1993 HVPS outbreak in southwestern us, which instantly claimed 12 lives, followed an exceptionally mild winter that saw an explosion in field mice population. A similar rise in rat population was observed in Gujarat just before the 1994 plague outbreak.

The various members of the hantavirus family are: Hantaan virus in Korea, China, Japan and Siberia; Seoul virus in Sri Lanka, Korea, China and Japan; Puumula virus in the Scandinavian countries; the supposedly harm- less Prospect Hill virus; Baltimore rat virus in North America and Muertocanyon virus in southwestern US.

The director of Nii K K Dutta stressed the need for investigations on a wider scale. Says Dutta, "It is one of the upcoming infections. Confirming its presence needs a wide variety of investigation, for which we do not have adequate facilities."

Scientists still do not know how the virus reached India. "Considering the mobility of rodents, it is not impossible that a virus causing HFRS or HVPS from neighbouring countries may have come to India," says Banerjee.

In case anyone contracts the disease, Banerjee says, "Bed rest, care of blood and body fluids, symptomatic treatment for kidney dysfunction and haemorrhages, and preventing person to person spread are important."