The houses upon sand 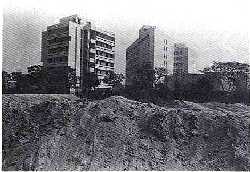 Delhi is sitting on an unstable pile of sand, warn seismic experts. Earthquake engineering experts thus recommend the micro-zonation (mapping of small areas) of the Capital and other important urban centres of the country. The department of science and technology, the Indian Institute of Technology and the department of earthquake engineering, Roorkee University, have agreed to start mapping the geological profile of Delhi's urban area in 1994.

Says A R Chandrashekhar of Roorkee University, "A seismic zoning map is necessary because damages during an earthquake vary according to local soil conditions. Structural and engineering planning should be done accordingly."

Experts warn that when loose, saturated, cohesion-less soil vibrates under seismic shock, the soil gets liquified under stress, causing great harm to building structures. The problem could be compounded in Delhi with its shallow groundwater table. With the banks of the Yamuna river almost wholly saturated, residential and industrial constructions in the area should be prohibited. Congested colonies in Delhi such as Wazirabad, Mayur Vihar, Hauz Khas and Chanakyapuri are known to be almost wholly sitting on sand. Areas such as Connaught Place, Indraprastha Estate and Delhi Cantonment are located on sand deposits interspersed with silt bands.

Developing a sound database for micro-zoning is difficult because of the paucity of data on past earthquakes. However, N C Nigam of IIT-Delhi warns, "With the present unplanned growth, unless seismic zoning is carried out to incorporate codes of practice for structurally safe houses, there could be a disaster."

The seismic response analysis of old monuments in Delhi, it has been suggested, could throw light on the resistance capabilities of buildings. He also points out that large-scale construction activities might make it possible to collect data that will help understand sub-surface conditions.