The hunt for new markets 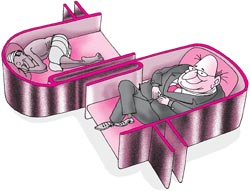 The environmental industry is quite nebulously defined. Less a sector than an agglomeration of many kinds of goods, services and technologies, this us $550 billion industry is nevertheless on a growth roll. Especially in the developing world, where environmental regulation is becoming more stringent, and whose exports must match up to developed country standards. While the environmental market in developed countries grew meagrely at 1.6 per cent in 2000 and 2001, its rate of growth in developing countries was a healthy 7-8 per cent in the same period. An Indo-German Chamber of Commerce study, published in February 2001, estimated that developing countries would account for nearly 20 per cent of the global environmental market by 2010. Asia alone would account for 14 per cent, up from 4 per cent in 1996.

Valued at us $4.36 billion in 2002, the Indian environmental market is also estimated to annually grow at a rate of 15 per cent, according to a draft study by the Indian Council for Research in International Economic Relations on trade in environmental services.

It isn't surprising, therefore, that the world's leading exporters -- the eu, the us, Japan -- are looking to prise these markets open. The largest net exporter, the eu, pushed for a negotiating mandate on environmental goods and services at the wto Doha Ministerial Conference in 2001. It argued that environmental sector liberalisation was a win-win situation for environment, trade and development. However, deliberations thus far are not clear on what where the gains -- on the side of environment, or for the plain old sake of trade -- may materialise, particularly for developing countries. Negotiators will now look to this year's Cancun Ministerial Conference for further direction.
Environmental goods, narrowly defined, include those equipments or technologies required to produce goods in an environmentally sound manner and for 'end-of-the-pipe' treatment. A broader definition would be based on the environmental characteristics of goods and the environmentally sound process they are produced in.

Given such wide divergence, members agreed to negotiate the question of liberalising trade on environmental goods on the basis of a broad-based list of goods. This approach was a practical measure, but as discussions proceeded, the trade interests of different countries began to precede environmental gains.

As a starting point, New Zealand proposed a list of environmental goods, a list the Asia Pacific Economic Cooperation (apec) forum (a group of 21 developed and developing economies around the Pacific rim) had drawn up in the late 1990s for trade liberalisation based on proposals by individual apec members, not on any agreed definition.)

Subsequently, Japan introduced another list of 166 items. It took care of the apec list. It also included all the items contained in a list developed by the Organisation for Economic Cooperation (oecd). (Unlike the apec list, the oecd list was developed for analytical purposes.) In addition, there were some goods manufactured using comparatively environment-friendly technologies, and consumer products such as cfc-free consumer products and energy efficient consumer appliances.

India has indicated it would like to include products that are 'environmentally friendly'; bio-degradable products, products made from natural fibres such as jute and coir, products made by traditional processes such as hand-spinning and handloom or products made using natural chemicals and dyes.

Currently, the issues influencing negotiations on the liberalisation of trade in environmental goods are:

politics of definition: 'Environmental goods' has been considerably debated in the relevant wto subsidiary bodies. Defining products on the basis of their utility in end-of-pipe treatment restricts the scope to a list of goods that primarily benefits the eu, Japan and the us. Such a list would include a variety of industrial products such as pumps, valves, compressors, filters and sorting equipment for recycling.

Such definition rules out the possibility of including in the list inherently 'environment-friendly' products -- natural rubber, gutta-percha; raw or processed flax; textile fibres; precisely the kind of products that countries like India can produce and want to create a market for -- whose production, end-use and disposal either have a less negative, or even a positive, environmental impact relative to a substitute good providing similar function and utility.

multiple uses of environmental goods: A major problem in identifying a list of environmental goods is multiple use. In what way would liberalising trade in a product such as a conveyor belt, or a heat exchange unit, or vacuum pumps -- all items in the apec list -- be good for the environment? Multilaterally resolving this problem isn't easy. The World Customs Organization would have to develop special codes to identify goods meant only for environmental purposes. This is a problem of such proportions that it influences what items would be included in the 'final' list.

degree of environmental friendliness and access to environmentally sound technologies (ests): Increased access to ests would certainly benefit developing countries. But access is constrained more by intellectual property protection, the lack of skilled manpower to operate these technologies and the lack of other services such as engineering and construction, than barriers such as tariffs. Besides, technologies cleaner or resource-efficient today may become relatively dirty in a fairly short period, as better technologies become available.

trade patterns & trade barriers: Trade data for the oecd and apec lists show an overall negative, but improving, balance of trade in environmental goods for developing countries'. From 1996 to 2001, their export-import ratio rose from 0.36 to 0.52; that of developed countries fell from 1.39 to 1.25. The top nine countries accounted for 90 per cent of developing countries' export share of these products in 2000. India was the ninth largest exporter; its exports, accounting for 1.7 per cent of all exports by developing countries, totalled us $787 million (See graph: India's top five).

At us $28 billion, the global exports of a list of environmentally preferable products (epps), drawn up by the unctad for 2000, was less than 10 per cent of the global export of goods on the oecd and apec lists. But, Asian countries also accounted for 33 per cent of this market, behind only the developed countries of West Europe (43 per cent) (See graph: Good for Asia)

Of the epps of particular interest to India -- jute and coir -- India's exports for these products in 2001-2002 was us $150 million and us $113 million respectively. While the tariffs for jute and coir products in developed countries were quite low for the raw materials, they varied from 0-20 per cent for the value-added products. India, therefore, potentially gains from the lowering of tariffs on these products.

Launched under Article xix of the Global Agreement on Trade in Services (gats), negotiations on the liberalisation of trade in services, including environmental services, have gone on since 2000. Members use the request-offer approach. A member makes an initial request, to other members, for new market access commitments in the sectors it is interested in. Then each member reciprocates with its initial offers.

Issues influencing these negotiations are:

classification: Not obligatory; each member can use any classification they prefer or develop one of their own.

The eu proposal to reclassify environmental services, based on the oecd/ Eurostat classification, is the most far-reaching (See table: Wider net). Arguing that the environmental industry is "developing beyond traditional end-of-pipe towards integrated pollution prevention and control, cleaner technology, resources and risk management," eu proposes two broad categories. The first includes purely environmental services or "core" services. The second includes related services such as design, engineering, r&d and consultancy services that could have an environmental end-use. The eu proposes that the second group be "clustered" together for negotiations on further liberalisation. Some developing countries such as India are opposed to clusters, due to reservations over opening up service sectors such as engineering and construction.

All developed countries except Canada have requested commitments on the basis of a new classification of environmental services. India has not yet proposed its own classification. Besides, the commercial implications of some of the proposed new categories of services, such as biodiversity protection and the remediation and clean-up of soil and water, aren't clear as yet.

problems with public utilities: Most environmental services under the current classification in the wto are of the nature of a public good in a majority of the developing countries. In most cases, sewage, refuse disposal and sanitation services are provided for by the local and regional government authorities, through public enterprises. The liberalisation of this sector could benefit developing countries through the availability of advanced know-how and environmental technologies at a lower cost, easing severe budget constraints governments face. But, privatisation has often led to sharp increases in prices, ranging from 30 to 50 per cent in countries that have opened up their water and waste management sectors. In some cases, it was as high as 300 to 400 per cent.

In India too, the local municipalities provide these services and local authorities are excluded from gats coverage. It would therefore be difficult for the Union government to make any commitments internationally. India could voluntarily open up this sector without making any specific commitments and has already done so in some cases.

market access: The main mode of trade in environmental services is through the presence of the commercial entity providing the service in the host country. This is called, in gats parlance, Mode 3 of the supply of services. This supply mode is closely linked to Mode 4, which entails the temporary movement of natural persons. Mode 4 is is particularly important to countries such as India, which has a robust environmental consulting services segment.

India's export interests are limited to labour-intensive activities in selected regions in South Asia, Africa and the Middle East. The main barriers facing India include domestic regulations on business operations and employment, and public procurement policies, since a large part of environmental services is still in the public sector. The biggest challenge facing developing countries in the movement of individual service providers is discriminatory treatment. Any commitments undertaken by India should therefore be done only as part of a larger negotiating strategy.

India may be well served to open its markets to other developing countries with mutual reciprocation. But, it cannot do so without opening up to developed countries also due to the wto principle of non-discrimination. It can however foster trade with other developing countries through bilateral or regional trade agreements. Any market access provided to developed countries should be done to obtain gains in other areas under negotiations.