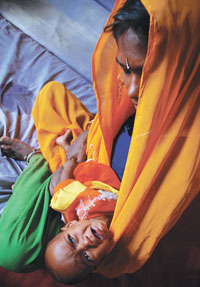 DESPITE a 40-year national programme to mitigate its prevalence, anaemia remains the second most common cause of maternal deaths in India. Since 1970, government doctors have been recommending iron and folic acid tablets to pregnant women—and distributing them free—to combat anaemia.

Yet, studies conducted in rural Delhi in 2002 show anaemia accounts for 20 per cent deaths due to pregnancyrelated complications.

Anaemia during pregnancy is also the reason so many infants weigh less than the normal 2.5 kg at the time of birth. UNICEF’s State of the World’s Children 2009 records 43 per cent of India’s under-five population are of low birth weight, the highest in the world. Now, under the National Rural Health Mission, the government has proposed intravenous iron-sucrose injection for pregnant women with severe anaemia.

But a recent study, published in the May 25 issue of Current Science, claims the chief reason for anaemia in pregnant women is not lack of vitamins or minerals, but mal-absorption. “Our five-year study showed in spite of regularly taking the iron and folic acid supplements, there was no significant increase in haemoglobin levels in pregnant women.

A K Susheela, director of a Delhi nonprofit, Fluorosis Research and Rural Development Foundation, said, “But when along with the supplements, we removed or minimized dietary intake of fluoride, there was a healthy jump in the haemoglobin levels.” Susheela and doctors from the department of obstetrics and gynaecology (OBGYN) at Deen Dayal Upadhyay Hospital in New Delhi conducted the study.

The human intestine is lined with a thick wall of columnar cells. On the surface of these cells, there are tiny hair-like structures called microvilli, which absorb nutrients and pass them on to the blood stream to build haemoglobin. Fluoride destroys these microvilli, which fall off like hair. But if fluoride is removed from the diet, microvilli regenerate within a week.

Susheela’s project, launched in 2005, investigated 249 women who were less than 20 weeks pregnant. Only anaemic women (with haemoglobin less than 9.0 gram per decilitre (g/dl) and urine fluoride 1 milligram per litre (mg/l) were considered. They were divided into two groups—the intervention group of 90 women was told to avoid food and water containing fluoride and increase intake of essential nutrients through diet; there were no such intervention for the control group of 115 women.

“The women were told to give up rock salt, black tea, junk street food, salted snacks, all of which are high on fluoride content,” Susheela said. If researchers found drinking water with more than 1 mg/l of fluoride, women were told to switch over to a safer source of water. The study results showed the urinary fluoride content among women of the intervention group reduced from 2.082 mg/l to 1.628 mg/l; these women were in the first trimester of pregnancy.

Fluoride and weight at birth Over 80 per cent women of the intervention group who joined the project in their first trimester, delivered infants with normal birth weight; about 77 per cent of women who were in their second trimester delivered normal birth weight babies. In case of the control group women, the figure remained low at 49 per cent and 47 per cent, respectively.

The study’s interventions had more results to show: the body mass index (BMI) of women in the intervention group increased significantly. Susheela’s study has, however, evoked strong reactions. Sanjay Anant Gupte, president of the Federation of Obstetric and Gynaecological Societies of India (FOGSI), is not convinced: “In case of the sample group, two interventions were made—removal of fluoride and introduction of healthy diet. But in case of the control group, pregnant women were not counselled for a healthy diet. How can the results be attributed to fluoride removal alone?”

P K Sekharan, gynaecologist at Kozhikode Medical College, agreed as far as the role of fluoride in damaging microvilli and non-absorption of nutrients is concerned. “We would definitely do better if we can provide pregnant women safe drinking water. But can the Indian government do that?” he questioned. According to him, even if dietary intake of fluoride is removed, iron and folic acid supplements must be provided. “The benefits of these supplements have been proven scientifically,” he added.

Gynaecologists blame non-compliance. “Because of illiteracy women do not consume iron and folic acid tablets provided free of cost by the government,” said Sekharan. Non-compliance is the reason behind anaemia among pregnant women, said Gupte. According to him, FOGSI has been advising the government to introduce intravenous iron-sucrose injections. “Even two such injections during pregnancy can provide the required iron dose,” said Gupte.

Susheela claimed it was wrong to blame illiterate pregnant women. Doctors make such allegations only to hide the damage they have done in the past few decades, she said. “The study was a pilot; we have completed another such study at a different hospital in Delhi. The results are better than the previous one. It will soon be published,” she added.