A new fossils throws open the debate on Homo erectus 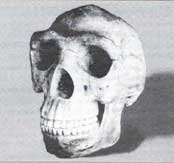 A FOSSILISED jaw of Homo erectus-modern man's closest ancestor has been traced in the former Soviet Republic of Georgia, could be the oldest ever found outside Africa. It has been generally believed that Africa is the evolutionary home of humans, with the Homo erectus developing from proto-human species. The new finding could mean that Homo erectus moved out of Africa much earlier than previously thought.

Leo Gabunia and Absolon Vekua, of the Georgian Academy of Sciences, who discovered the lower jaw and the teeth of the human ancestor, say that the fossil appears to be between 1.6 to 1.8 million years old. "The fossil is about a million year older than any widely accepted pre-human remains found in Europe," they claim.

Anthropologist Henry McHenry, a professor at the University of California, is convinced that the fossil remains could be 1.8 million years old. "In the strata of sedimentary rocks where the jaw was found, there were remains of lots of other kinds of animals which date to Pliocene and early Pleistocene period.

Some researchers have questioned the age of the Georgian fossil arguing that it might be only 900 000 to 1 million years old. McHenry says that, part of the problem arises from trying to use animal fossils to date the site. "Also, the fact that the fossil represents such an isolated discovery of an early human ancestor outside Africa makes us nervous that it may be misdated. There are plenty of cases of misdating", he adds.