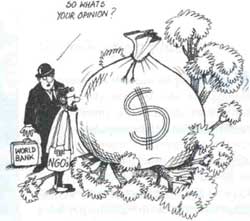 the ecodevelopment project that is proposed for seven protected areas in India in the pilot phase has been facing severe criticism from all quarters. This is being funded jointly by the World Bank (wb) (us $28 million in form of loans) and the Global Environment Facility (us $20 million in form of grants). The project hopes that by giving local communities, living in and around protected areas, some alternative sources of fuelwood and fodder and by encouraging them to be less dependent on the forest resource for their livelihood, a major part of the pressures faced by protected areas in India will be significantly reduced.

ngos and local communities have been expressing serious reservations about the project. The wb board of directors, however, in total disregard for these concerns went ahead to give their final approval to the project on September 5.

On September 27, the wb organised an ngo consultation meeting in New Delhi, ostensibly to reassure that there was actually little to get worked up about. The project design is flexible and process oriented to address all the concerns that they have been raising. Unfortunately for the wb, the ngos present were not convinced. At the onset, they made it clear to the task manager of the project, Jessica Mott, that they see little purpose to the meeting considering that the project has already been approved by the Bank. "If there is a possibility of actually stopping the disbursement of funds and having an honest and open reassessment of the project then there could be a constructive dialogue. Otherwise this meeting is futile", began one of the ngo participants.

How open the Bank is to criticisms was evident from the fact that even before the meetings with ngos, it held a 'press consultation' calling some leading journalists to the Bank and informing them about the project. In the process, Mott also referred to ngos like the Centre for Science and Environment (cse) who were opposing the project, as 'artificial ngos' who need to be isolated or fought against. However, later at the ngo meeting itself, Mott was very much in the defensive when issues being raised by cse and others were strongly supported by some representatives of the Van Gujjar community of Rajaji National Park, who have made their own plans for managing the park. "This is our forest and our only home. We know best how to manage it. If the Bank has to give money, why not give it to us. Then see which is the better strategy, community forest management or ecodevelopment". emphatically stated Mastuk, one of the Gujjars in the meeting. "The whole issue of rights and control of local people is not being looked into by the project properly," said Ashish Kothari of Kalpvriksha?

Clearly the Bank had not anticipated such a united opinion among the ngos present. The present stand of the Bank seemed to be that they have created a flexible project and given space for participation. Now it is the responsibility of the Indian bureaucracy, pushed by ngos to use it for a better protected area management. "The question is of using this project to build up and strengthen institutions built on people's empowerment and control. Instead the project gives a very rigid and inflexible wildlife bureaucracy the discretion to allow people to be involved mostly through informal structures and interactions," pointed out Anil Agarwal, director, cse. The ngo participants jointly expressed that at a time when there is a growing debate within the country to reassess the present wildlife policies, which have not only been unsuccessful in saving wildlife but have also been grossly unfair to people, projects like ecodevelopment so totally dependent on external funds and so limited in perspective, can only throttle innovative experiments in wildlife management.