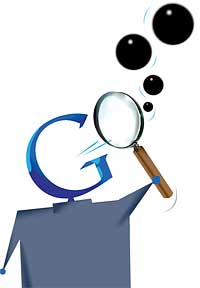 What's the link between Google and boiling a kettle? Ask US physicist Alex Wissner Gross. The Harvard academic claims two search requests on the Internet website Google produce "as much carbon dioxide as boiling a kettle". A typical Google search on a desktop computer produces about 7g CO2, Wissner said.

These figures were disputed by Google representatives, who say a typical search produced only 0.2g of CO2. But Wissner said carbon emissions stem from the electricity used by the computer terminal and the power consumed by the large data centres operated by Google around the world.

The American search engine is renowned for returning fast results. Wissner says it can only do so because it uses several data banks at the same time. "A combination of clients, networks, servers and people's home computers all added up to a lot of energy usage. Google isn't any worse than any other data centre operator. If you want to supply really great and fast result, then that's going to take extra energy to do so," Wisner said.

A statement by the company said it had made great strides to reduce the energy used by their data centres, but they still wanted clean and affordable sources of electricity for the power they use. "In 2007, we co-founded the Climate Savers Computing Initiative. This non-profit is committed to cutting the energy consumed by computers in half by 2010 and so reducing global CO2 emissions by 54 million tonnes per year. That's a lot of kettles," said Google in its statement.