The key is hydrogen 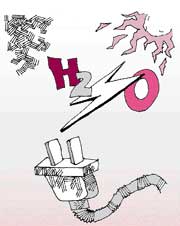 hydrogen has long been lauded as an answer to our energy problems. It can be produced from a cheap and abundant source -- water. Both its production and use are potentially non-polluting. Now the use of renewable sources like solar energy to produce hydrogen for domestic and transport facilities has been illustrated by two projects in Germany.

Freiburg is home to the Fraunhoger Institute for Solar Energy's self-sufficient solar house (sssh). Hydrogen can be produced for use in industries by electrolysis of water (splitting water into hydrogen and oxygen by passing an electric current). But if the electricity for electrolysis is generated by fossil fuels or nuclear power, the process will not be pollution-free. Therefore, electricity should be obtained from renewable energy sources (like solar energy) for clean and sustainable hydrogen production. The sssh aims for non-polluting energy self-sufficiency by relying totally on solar energy.

This is achieved by producing hydrogen and oxygen from water in an electrolyser using electricity from solar cells. In summer when there is an excess of solar energy, hydrogen and oxygen are generated and stored in tanks. During winter, if the output of energy from solar cells is inadequate, energy for obtaining electricity can be produced by recombining the gases (oxygen and hydrogen) in a fuel cell. In this way, hydrogen provides a storage medium for solar energy, thereby offsetting seasonal variations.

The second innovative project is housed near Neuriburg vorm Wald, Bavaria. Here, about 3,000 sq m of photovoltaic cells supply electricity to two electrolysers which can produce upto 50,000 cubic m of hydrogen per year.

Solar hydrogen is becoming a reality, at least in the us, Europe, Saudi Arabia and Japan. Soon, hydrogen could replace natural gas. Hydrogen's crucial advantage is that it is an energy carrier -- it provides a way of storing and supplying energy from intermittent renewable sources.