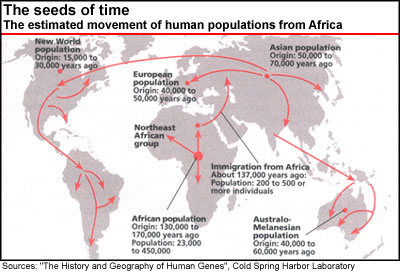 geneticists who gathered at a conference on human evolution in October at the Cold Spring Harbor Laboratory, New York, have come out with some estimates that could change our understanding of the evolution of our species. They say that as few as 500 individuals, who moved out of Africa some 1,40,000 years ago, may have populated the rest of the world. The estimates have been derived from a new kind of archaeology which depends on the human genome.

The estimates will only be accepted when historians and archaeologists can finds dates and numbers to match. But the estimates establish dna as a vast resource for information on human evolution. Due to the fast methods of dna sequencing and reading of chemical letters, geneticists are gathering an immense amount of data regarding human populations. But work on developing methods to interpret this data is still in the initial stage. Estimates of the size and location of human populations and the timing of their migration from Africa were also discussed.

But the calculations of the geneticists are based on a number of assumptions, and their dates have large margins of error. This created a lot of confusion for those participants at the conference who came from other disciplines -- especially archaeologists. However, the fact that dna from a few drops of blood can unravel the mysteries of human evolution is hard to ignore despite the flaws in the current level of understanding.

The genetic variation found among humans is very small compared with that of most other species. Humans evolved too recently to have accumulated any significant amount of genetic changes or mutations. However, there is still a considerable amount of genetic variation in people for geneticists to study -- much of which was present at the emergence of the species. From studies in the past, geneticists compared proteins that are structured and coded in dna . This does not yield much for scientists as the coding region of dna does not change much. But most of the genome is composed of non-coding dna . This is ideal for geneticists as it accumulates at a regular rate, providing the most useful data regarding diversity and age of different populations.

The estimates have yielded some important results. Genetic samples of populations around the world reveal that sub-Saharan African populations possess greater genetic diversity than non-Africans. When a smaller group breaks away from a founding population, it takes only a sample of the full range of genetic variation. This can explain why non-Africans retain only a subset of the diversity that the sub-Saharan Africans retain.

Non-Africans got separated from the main human population in Africa some 1,37,000 years ago, according to the estimates of Mark Stoneking, population geneticist at Pennsylvania State University. He studied genetic elements known as Alu insertions (small and apparently useless pieces of dna that have gradually spread throughout the human genome) from 34 different populations. The diversity of Alu insertions among African populations suggests that Africans maintained a larger population size through the prehistoric period than those who emigrated, says Stoneking. Small populations tend to lose their genetic diversity over time.

The original human population is estimated to have numbered a few thousand people. Studies of mitochondrial dna (a unique category of genetic material derived only through the mother's line) indicate that the founding human population stood at a mere 10,000 individuals. But results of the research conducted by Sarah Tishkoff, evolutionary biologist at Pennsylvania State University, dispute this. Her estimates of the size of the long-term early human population varies between 23,000 and 4,47,000 people.

However, it is not clear as to exactly where in Africa was the cradle of ancestral human populations. But estimates say it was in East Africa. Elizabeth Watson of Massey University, New Zealand, says the Turkana people of Kenya reveal the greatest genetic diversity of any known group in their mitochondrial dna . This kind of genetic material is free from the shuffling of genes that creates new individuals and changes over time only through mutations. Watson says that the region with the highest genetic diversity of a species is generally its place of origin. Moreover, fossil remains of early humans found at Lake Turkana in Kenya support her claims.