The malady of the lakes 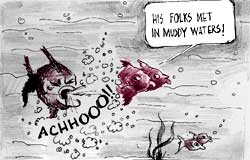 colour is all when it comes to mating. The cichlid species of fish depend on the ability to distinguish colours for mate selection. But eutrophication of the Great Lakes in Africa -- their habitat -- has limited their breeding, affecting their evolution, according to studies by researchers at the Institute of Evolutionary and Ecological Sciences, University of Leiden, The Netherlands ( Science , Vol 277, No 5333).

Cichlid fish species can interbreed and produce sexually fertile offspring. This is unlike most animal species, which are sexually isolated -- that is, breeding can occur only within the species. However, among cichlid species sexual isolation is achieved only through mate choice. Selection of mates depends on their colour. Similar-coloured species interbreed faster, leading to quick assortment of species of certain colours. Found in different freshwater environments in the Greak Lakes, the species thrive in environmental conditions so diverse that they utilise almost all the resources available to freshwater fishes in general. These factors together have resulted in evolution of more species. In fact, the cichlid present the best example of explosive evolution known to biologists today, despite the fact that they have evolved from a single ancestral species in a very short period -- in the evolutionary time-scale -- of about 12,400 years.

The researchers found that eutrophication of Lake Victoria and other Great Lakes resulted in turbidity in the water, which interfered with the ability of the fish to select the most fertile mates.

The fish have eyes with retinas that can distinguish a range of hues between blue and red. Interbreeding between closely related species is regulated only by mate choice. A majority of cichlid species fall under three genera -- Nyererei , Neochromis and Paralabidochromis . Closely related species living together in the same environment have males with colours of the opposite ends of the spectrum -- one being blue and the other red or yellow. The same contrast was noted by the researchers between colours of males within the species, and matched the ability of the retinas of females in the species to absorb (and distinguish between) colours. If females prefer conspicuous over non-conspicuous males, individual colour vision could be responsible for this dichotomy.

The researchers tested the implications of this in laboratory conditions where light conditions varied. In a closely related red/blue pair of species, females preferred males of their own species over those of the other species in broad spectrum light, but mated indiscriminately in monochromatic (single colour) light, where colour differences were masked. This confirmed that pairs of differently-coloured species choose mates within and across species on the basis of colouration. Poor light constrains this choice. Eutrophication decreases light penetration and narrows the light spectrum, with loss of light of a shorter wavelength. Eutrophication must, the researchers concluded, pose constraints on the function of colour signals and mate selection.

To confirm this, they studied the effect of light on cichlid diversity south and north of 13 rocky islands in Lake Victoria. They studied 14 variable environmental factors, including the presence of predators and food availability. Taking these, and differences due to natural selection pressures and population density into account, the researchers confirmed that eutrophication and pollution were, in fact, responsible for decrease in diversity of the fish species. Decrease in water transparency in Lake Victoria as a result of deforestation and agricultural practices has been documented since the 1920s. This, along with predation on other fish by the Nile perch, have led to the decrease in cichlid fish diversity. Pollution due to industrialisation and urbanisation have worse compounded the problems, threatening the existence of the species.