The new century will explode into your home through plastic optical fibres, say US scientists, promising an amazing, "wired" future 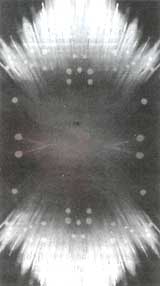 PLASTIC could soon form the heart of the "wired" home. According to American researchers, data for everything, from multichannel digital television to the Internet, could be channelled through cheap and easily-fitted optical fibres, and all because of an annoying effect that makes the substance useless for precision optics.

Unlike glass, plastic optics such as fibres and lenses contain tiny imperfections that scatter light rays. So when you have to use optical fibres for communications, you use those made of glass. To carry high-speed signals over long distances, optical fibres must have such tiny cores that there is only one path the light pulses can take.

However, these tiny cores make long-distance fibres hard to connect, so larger-core fibres are used for short links within buildings.

Plastic fibres could be made with larger cores and would be easier to handle. But it was thought to be of limited use because of high power losses due to the material's inbuilt imperfections and the limited transmission speeds caused by scattering of the signals within the fibre. But now, Anthony Garito working at the University of Pennsylvania in Philadelphia, USA, and a separate group at Bell Labs in New Jersey, USA, have both shown that large-core plastic fibres can transmit high-speed signals better than expected.

The transmission speed of a fibre - measured in megabits per second - is limited by the degree to which light spreads out within it: late-arriving parts of a signal distort the received pulse. Scattering limits speed because you cannot send another until the last one has stopped bouncing around in the fibre. In glass, the pulses spread in linear fashion with distance.

However, Garito reports that scattering in plastic produces a curious effect" it couples the light paths together, so that pulses spread only in proportion to the square root of the fibre's length. So a digital pulse can travel 10 times as far through a plastic fibre before it spreads out as much as it does in an equivalent glass fibre.

This finding suddenly makes plastic fibre attractive for the next generation of home and office cabling, which could carry digital television and Internet signals at up to 1,000 megabits per second. Garito says that large-core plastic fibres are attractive for the "Firewire" standards being currently developed by the computer and consumer electronics industries for home video editing and transmission.

Many computers can now take digital video from a Firewire output on a portable camera, popularly known as a camcorder straight into a computer for editing.

For instance, an average 21st century home wired with plastic fibre could carry broadcast-quality pictures from a digital camera monitoring a baby. Similarly, high-quality neighbourhood watch video signals could be transmitted around a wired neighbourhood.

"Plastic fibre would be good for low-end, quick-connect, easy-to-use cabling that the do-it-yourselfer could put together," says Garito.