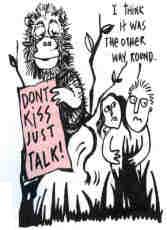 A NEW route used by the human immunodeficiency virus (HIV) to sneak into the body has been tracked by scientists. A series of studies on rhesus monkeys has suggested that the virus that causes AIDS can infect individuals through the mouth, and this includes even those persons who do not sport oral sores or bleeding gums. The study not only underscores the risks of contracting the virus through oral sex, but also the fact that we are still very naive about the movements Of HIV from person-to-person at the microscopic level.

Researchers from the Dana-Farber Cancer Institute in Boston, Massachusetts, and Tulane University in Los Angeles, California, tried to infect sedated monkeys with the simian immunodeficiency virus (SIV), the virus that causes AIDS in monkeys. They administered an SIV solution into the mouths of seven monkeys and found to their surprise that six of the seven became infected with the virus even though they did not have sores, cuts or a gum infection in their mouths.

These findings "should be a warning that oral sex is not safe sex," said Ruth M Ruprecht, an immunologist from the Dana-Farber Cancer Institute who led the research team. Public health officials have expressed great concern over the study's results. Their fears source from the fact that many consider the contraction Of AIDS and oral sex to be two mutually exclusive options.

Public health officials in the us have already concluded that unprotected oral intercourse was unsafe. In recent years, a number of reports have surfaced about people who had become infected with HIV even though they had engaged in only oral sex. The federal Centers for Disease Control and Prevention (CDC) in Atlanta, Georgia, had added unprotected oral sex to the list of risk behaviours for transmission of the virus, years ago. But because of the lack of concrete evidence and the conclusions reached by few studies which indicated that saliva contained compounds that made HIV less infectious, many became smug about the risks.

Scientists accidentally stumbled upon this latest finding while conducting an inquiry into a different matter. Ruprecht and her colleagues had initially set out to probe how AIDS got transmitted from an infected mother to her newborn child. The team believed that newborns got infected at birth by swallowing the mother's blood or vaginal fluids. The scientists supposed that it was the absence of acid in the infants' stomachs which probably made them susceptible to the infection.

To verify their theory, the scientists dribbled doses of SIV into the mouths of adult rhesus monkeys who were given a. drug to neutralise their stomach acids. The monkeys, unable to inactivate the AIDS virus, died. But researchers found that adults who were not given the drug also got infected. It was inferred from these tests that an oral dose of semen from an HIV-infected person can lead to AIDS in another, if it comes into contact with tissues in that person's mouth.

One possible route taken by the traveling virus could be the tonsils, which contain large numbers of the kinds of lymph cells that are vulnerable to HIV and SIV. The team is trying to understand the role of a layer of tissue known as the mucosa (a mucous-secreting membrane that lines the mouth) in transmitting the virus. The study also indicated that all other conditions being the same, oral infection could occur with virus doses 6,000 times smaller than those needed to cause the infection rectally. However, experts pointed out there is still no evidence that HIV can be transmitted by casual contact such as kissing or sharing utensils.

Next, the team tried to find out how strong a virus solution was needed to cause infection through the oral route. They compared the most efficient method of causing AIDS (direct injection of viruses into the bloodstream), with the oral method of infection and found that it took a viral solution that was 830 times more potent to cause an infection through the oral passage. The saliva of an HIV-positive person contains a far lesser amount of virus with only one virus per millilitre of saliva, said Ruprecht. But human semen contains 10 to 50 viruses per millilitre. Hence, infection is more likely to occur through semen than through saliva.

These results have come as a surprise for a lot of people. Helene Gayle, an HIV-prevention expert at CDC points out that more educational work on the risks of oral sex remains to be done. Gayle plans to distribute educational material to community health groups and state and local authorities to get the message across to the public.

However, according to Anthony S Fauci, chief of the National Institute of Allergy and Infectious Diseases, parallels could hardly be drawn between the experiments conducted on the monkeys and the condition found in humans because the researchers have used SIV, which is slightly different from HIV and have also worked with pure viruses for the tests, while most viruses in humans are found inside cells. In fact, there still remain many loose ends that have to be tied up.