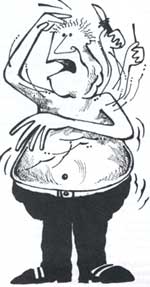 ONCHOCERCIASIS afflicts a person infected with filaroid worms of the genus Onchocerca, transmitted by biting flies. Onchoceriasis is now endemic in 17 of Uganda's 39 districts, affecting between 1.2 and 1.5 million people mainly in the north and west. One of the reasons for the neglect of the strain of onchocerciasis that does not cause blindness is that itching is its main symptom and itching is not treated as a serious problem.

In a desperate attempt to assuage the itching, people scratch themselves with stones, twigs or knives ending up with bleeding wounds, sores and pain. "Sometimes patients die from secondary infections like tetanus, because of scratching their wounds with stones or metal," says Richard Ndyomugenyi, national coordinator for onchocerciasis control in Uganda. Mugisa, a peasant farmer who lives in south-western Uganda, says the condition has forced him to stop working on his farm.

People suffering from the skin disease are also socially stigmatised because of the physical defects that go with it. They are thought of as being dangerous and dirty and are avoided for fear that they might transmit their disease to others.

The itching is caused by parasitic worms that develop into mature microfilariae. These minute organisms multiply by the million and spread throughout the body. "These foreign bodies in one's skin cause extensive damage due to itching," explains Albert Guma of the Uganda River Blindness Foundation. The parasites are transmitted by female blackflies which breed in fast-flowing rivers and infect people living within a 15 kin radius; wind-assisted female blackflies can fly upto 25 kms.

In the '60s and '70s, blackfly control took on great importance and serial spraying of rivers to kill the larvae were common. This programme method has proved successful in certain places like west Africa and a section of the river Nile in east-central Uganda. But it has failed in areas where river courses are heavily forested and breeding sites inaccessible. Farmer Mugisa's home district, where the river Munyanga runs through the impenetrable Bwindi forest, is one such area.

In other parts of the country, brakes were applied on the carrier control programme due to years of political strife and the fly managed to reclaim areas where it had earlier been eliminated. Moreover, drugs such as suramin produced such severe side-effects that they were discontinued. The procurement of the drug ivermectin in 1987, represented a significant advance for mass treatment in endemic areas. Michel Pawue, heading the Sight Savers Ivermectin programme, says the tablets are "Safer than aspirin". Each tablet costs US $3 and treatment requires tip to two tablets a year for up to 15 years as the drug kills only young worms, and adult worms have a 15-year lifespan. The World Health Organization hopes that by 1997 it will have identified a new drug - a 'macrofilaricide'- which could cure the disease in a single dose.