The number one rule

The Swiss government regulates even the numbers of polluting particulate matter 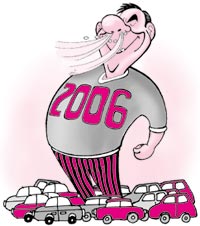 the Swiss Parliament has become the first legislative body of the world to regulate the number of particulate matter -- a pollutant emitted by vehicles. From January 1, 2006, new diesel passenger cars sold in the country must emit no more than 100 billion particles per kilometre (km). The vehicles would also have to comply with the mass limit of 0.025 grammes per km laid down under the Euro iv legislation. Currently, only the mass of the particulate matter is regulated across the world.

Particulate matter represents a class of chemically and physically diverse substances. They can be differentiated on the bases of origin, formation mechanism, size, chemical composition and atmospheric behaviour. They adversely impact the cardiovascular system, respiratory tract as well as the lung function.
Recently there has been an interest in examining the relationship between the number of particles and the health effects. Research has proved that though the mass concentration of particles could be quite low, their numbers can be very high. The Gasoline Vehicle Exhaust Particle Sampling Study, presented at the Diesel Engine Emission Reduction conference held in August 2003, concludes that the number of extremely small particles emitted by gasoline vehicles -- the 'nominal' emitters -- may be as high as 100,000 billion to 10,000,000 billion per kilogramme of fuel at a high speed.

A 2003 report, Future Diesel, of the Federal Environment Agency of Germany highlights another justification to limit the particle count. It states: "To avoid misplaced efforts in the form of technical developments aimed primarily at reducing the mass, the particulate count must be controlled...." This implies that technological advancements should not only aim at reducing particle mass, but also their number; this is imperative because technical improvements mean that vehicles may emit finer particles having less mass, but their numbers could be quite high. The report adds, "...mass criterion would ensure that large particulates are controlled, while the number-based criterion would simultaneously reduce the small particulates that are 'relevant' due to their affect on health."

The Swiss limit applies to particles having a size of 20-500 nanometres. Procedure to measure the numbers would be defined before the end of 2004. Two methods can be used. The first is the Condensation Particle Counter (cpc), which involves enlarging the nanoparticles, followed by their optical detection. The other method, the Electrical Diffusion Battery, also uses a similar technique, but along with revealing the particle number it also provides data about the pm surface, including its size.

Experts assert that whatever method is used, measuring the particle numbers would not be easy. "The measurement of the number, size and surface area of nanoparticles is more complex than the conventional measurement of mass. Since there have been no standard measurement methodologies, comparing the results of different studies on particle size and number has proved very difficult in the past," states a July 2003 report of the Particle Measurement Programme (pmp) -- an European project aimed at identifying methods to measure the particles. The Swiss government is expected to follow the procedure recommended by the pmp. As per its initial report, cpc offers the best option as it is robust, sensitive and commercially available. According to experts, whatever be the choice of technology, it must be capable of calibration -- a difficult proposition at present.

The success of the Swiss policy is imperative, as it would prove to be a rolemodel for others -- European countries like the uk, France and Germany are also involved in the pmp project and they are soon expected to regulate the particle number. Interestingly, the World Trade Organisation's Committee on Technical Barriers to Trade invited comments on the draft ordinance of the Swiss regulation during March 2004. It is apprehended that such regulations could make exporting cars to Europe quite difficult.

Given the complexity of the issue, it remains to be seen how effectively the Swiss regulation is enforced and to what extent will it influence others.