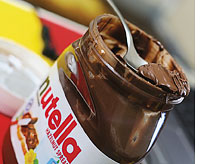 A tv advert for Nutella has been withdrawn in the uk after the country's advertising watchdog ruled that it exaggerated the hazelnut spread's nutritional value. The commercial showed several mothers giving their children Nutella on toast with a voiceover saying it could be part of a balanced breakfast.

The voiceover mentioned: "Each Nutella jar contains the equivalent of a glass of skimmed milk . Nutella releases energy slowly, making it ideal for a nutritive breakfast." The ad had to be taken off air following more than 50 complaints to the uk's Advertising Standards Authority.

The food and health rights group, Which?, welcomed the verdict. "It was highly irresponsible of Nutella to imply that their spread is healthier than it actually is," the groups spokesperson Miranda Watson said.

Ferrero uk, the makers of Nutella, said the company had not set out to mislead consumers, and the ad had been aimed at adults, not children.