The omega of it 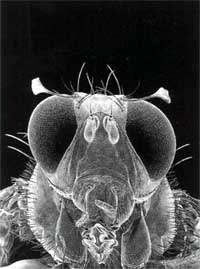 a gene, according to established beliefs, is a stretch of deoxyribonucleic acid (dna) which encodes hereditary information. When decoded, the message is seen to be a protein that performs a specific function -- giving form and shape, transporting small molecules or catalysing chemical reactions inside the cell.

To be sure, there are molecules of dna that appear to do nothing whatsoever other than ensuring their perpetuation; or those that encode an intermediate called ribonucleic acid (rna) en-route to protein synthesis, but no protein; and yet others that take part as accessory molecules in the bio-chemistry of the cell. Such exceptions apart, it was believed that if a piece of dna was required to fulfill an essential role in the economy of an organism, that role had to be mediated via a protein.

Recent research suggests otherwise. It points out that in certain instances, rna may be capable of performing the sort of function that was believed to be reserved for a protein. Cases also keep cropping up in which what appears to be an essential rna molecule is made, but exactly what it does is unknown. One of the more recent examples of this has been provided by M Mutsuddi and S C Lakhotia of Banaras Hindu University, Varanasi ( Developmental Genetics , Vol 17).

These researchers studied a gene called hsr-omega -- belonging to the heat shock class of genes -- in the fruitfly Drosophila melanogaster . Originally identified as genes that were expressed or 'turned on' in response to a rise in body temperature, these genes were subsequently discovered to be expressed whenever the organism was subjected to stress (application of heat being one such stress).

Most heat shock genes encode proteins that are believed to play a role in the system's efforts to withstand the stress. Hsr-omega is induced by several chemicals and gives rise to a number of rna intermediates or transcripts. Intriguingly, though, none of these transcripts seem to result in a protein product. Transcripts are not present in the fruitfly egg, but appear soon after the egg is fertilised. They are seen thereafter in a large number of tissues at all stages from the embryo to the adult fly. This in itself suggests that the gene might be necessary for the fly.

The observation that the absence of hsr-omega is a lethal condition, clinches the issue. Therefore, it is important to understand the details of how the expression of hsr-omega is regulated, which is what Mutsuddi and Lakhotia have done. In a series of experiments, they prepared dna fragments that contained regions of hsr-omega that could be expected to control the expression of the gene. Such regions, known as promoters, generally occur as dna sequences adjacent to the portion that codes for a protein. The fragments were so prepared that in each one, a different part of the controlling promoter (measured in units of bases, the building blocks of dna code) was missing.

In order to test whether the fragment was functional, a second piece of dna (a reporter) was fused to the suspected promoter. The reporter encoded a foreign protein that could be stained through a series of chemical reactions to yield a blue colour. Finally, flies were engineered -- the dna fragment under test was injected into young embryos -- so that along with their own set of genes, all their cells had the dna fragment containing the putative promoter and the reporter.

These genetically engineered flies could be tested using a standard recipe at any stage and in any tissue for the appearance of a blue colour. It turned out that the critical bit of dna, the piece that conferred promoter activity, was present somewhere between 346 to 844 bases before the portion of the gene that encoded hsr-omega rna. This region contained dna sequences that are capable of binding ecdysone, a steroid hormone related to cholesterol and known to play a major role in the development of insects. This suggests a possible clue to the manner in which the activity of the promoter is regulated (in turn).

Interestingly, the 346-844 region is not sufficient for the expression of hsr-omega in the reproductive system; so there must be other portions of dna responsible for this. The study does not elucidate on this aspect, but it does take the first few steps in throwing some light on a mystery.