The other side of matter 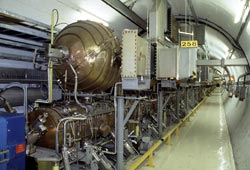 star trek's antimatter-driven warp drive may still be a fantasy but the idea of antimatter itself got a fillip. The ever-controversial Geneva-based European Organisation for Nuclear Research (cern) has recently produced antihydrogen -- the antimatter equivalent of hydrogen atoms. During their experiments, 39 physicists from 10 institutes working for the Athena project at cern were able to create about 50,000 atoms of antihydrogen for a period long enough to be worth further analysis.

In a hydrogen atom one electron with a negative charge revolves around the nucleus comprising a single proton. The proton has a positive charge. In antihydrogen the situation is reversed. A positively charged positron revolves around a negatively charged antiproton. According to the standard model of the Universe, matter and antimatter are equivalent but like mirror images of each other. Also, they cannot exist together. If brought together they annihilate releasing a burst of energy.

Scientists bombarded atoms with protons to make antiprotons that they caught in a storage ring, which fed the slow-moving antiprotons into a magnetic trap, thereby, immobilising them. Another similar trap caught positrons. The researchers then combined the two set of particles. Some of these antiparticles paired up to form antihydrogen. The so formed electrically neutral antiatoms then drifted out of the trap, annihilated and produced particles called pions. These pions signalled the death of the antiatoms. After counting the number of pions the scientists were able to predict the number of hydrogen antiatoms they had been able to produce -- about 50,000 at 15 above absolute zero (-258c).

If one were to take any piece of matter and simultaneously reverse all the charges of its elementary particles -- the electrons, protons and neutrons, the direction of time's flow and another property of particles called parity -- the substance would continue to obey exactly the same laws of physics. On this theorised premise stands the current model of the Universe.

If the antihydrogen produced now fails to attest such behaviour then the entire theory of the Universe's evolution could be under doubt. Antimatter has been created once before but for too minute a period to be analysed. cern's feat could also help answer one of the biggest questions about the formation of the Universe -- where did all the antimatter disappear just after the Big Bang. Scientists propound that equal amounts of matter and antimatter were produced during the process.

And if antihydrogen responds differently to gravity, it will raise questions about the theory of relativity. It might even hint at the long-sought unification of relativity and quantum theory. All this makes antihydrogen worth looking at.