The paradox of the loose joints

Laxity of joints can be a boon or liability, depending on whether they are subject to mobility or load-bearing. 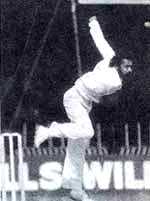 VIRTUOSI such as violinists and ballet-dancers have excelled often because of joint hypermobility, also known as joint laxity, which is a range of motion in excess of normal. It was joint hypermobility that enabled Indian cricketer B S Chandrashekhar to bowl his legendary spin and gave the nimble-fingered Niccolo Paganini, the 19th century violin virtuoso, the ability to span three octaves with little effort.

But do such performers pay a price for increased joint mobility? A 1972 study of 53 students at the Royal Ballet School in London had concluded that though this trait conferred an advantage on those seeking admission to ballet school, it faded away soon -- dancers with lax joints fall prey to ailments to which the loose-jointed are susceptible.

Musicians, too, suffer from the same paradox, a recent study has revealed. Taking a closer look at the data of a 1987 study concerning 660 students and staff members of the Eastman School of Music in Rochester, New York, researchers from the Hospital of Rheumatic Diseases in Ostersund, Sweden, and the University of Rochester found laxity of the wrist, fingers and thumb was most common in woodwind and string players and pianists and least common in trumpet and kettle-drum players. Repetitive movements, such as those performed by flautists and string players, are better tolerated by hypermobile than normally mobile joints, say researchers (The New England Journal Of Medicine, Vol 329, No 15).

However, in lax joints such as the knees or the spine that are subjected to load-bearing rather than repetitive motion, the converse is true, and hypermobility becomes a liability. In other words, lax fingers and wrists are good for flautists and string players, but lax knees and spines are bad for timpanists and others who stand while they play.

The notion that hypermobility may confer advantages in certain joints in a person and prove disadvantageous in other joints is not new. The Greek physician, Hippocrates, tells us the Scythians became the fastest and most feared horsemen in Asia Minor because they could presumably wrap their legs and feet around the horse's belly and hang on to it in a way that their foes never could. On the other hand, they were defeated in India because their lax shoulder joints made it difficult for them to draw bows or hurl javelins.