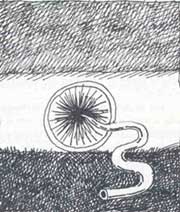 India faced 2 threats at the open meeting of the parties to the Montreal Protocol: the 1st was the increasing possibility of the fund to assist developing countries to phase out their ozone depleting substances (ods), like the gas used in refrigerators; the 2nd was the threat to illegalise the export of these gases to other developing countries.

The Montreal Protocol Fund, expected to fund the phase-out in India to the tune of US $2 billion, is down to counting its cents after providing just over us $10 million to India. India's most embarrassing problem is that every industrialised country -- following a proposal by Australia and supported by the US, Canada, South Africa and the entire European Union -- has illegalised India's export of refrigerant gases -- chloroflourocarbons (cfcs) -- to other developing countries.

But a crooked deal throws a crooked shadow. The protocol assumes that any import required by these countries will be satisfied by industrialised country multinationals. "Negotiators had forgotten in the '80s that India is a rare example of a developing country which has 4 indigenous companies producing and exporting cfcs," said a developing country diplomat who wished to remain anonymous. "This could be called a failure of Indian diplomats negotiating the protocol."

The industrialised countries are allowed to maintain 10 per cent of their production capacity after 1995, primarily to meet the requirements of the developing countries which are allowed a grace period of 10 years to completely phase out cfcs. Highlighting the fear that the growing use of refrigerators and airconditioners in the developing countries could lead to a shortfall of cfcs after 1995, the industrialised countries forced their quota up to 15 per cent.

The embattled Indian companies are girding up for battle at the 10th anniversary meeting of the treaty at Vienna in December this year, where final decisions will be taken.

But Vienna this winter could be a hotseat affair: several industrialised countries will be knuckledusting a proposal to further whittle down the CFC, hycrochlorofluorocarbons and the agricultural fumigant methyl bromide phase-out grace period allowed to developing countries.