The price of madness 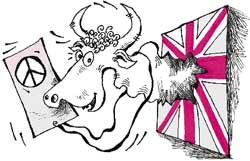 truce has been called by the uk and the European Union ( eu) in the three month-old battle over beef. The agreement was reached last month at the eu summit in Florence, Italy. The agreement consists of a package of measures that aims at a long term eradication of bovine spongiform encephalopathy ( bse ) or 'mad cow disease' from British herds as well as a phased lifting of the ban on British beef exports. The uk has reciprocated by ending its campaign of non- cooperation with Europe. It had decided to obstruct all eu proceedings for as long as the beef crisis remained unresolved and had vetoed over 100 decisions in the previous two weeks of the summit.

Following the agreement, British farmers will have to slaughter 150,000 cattle to eradicate bse . But no time period has been specified under the agreement for the lifting of the ban which means that it could take several years before the ban is fully lifted. In order to offset the loss suffered by British farmers, eu has agreed to pay us $1.05 billion in compensation.