The quest for water

...takes NASA to the moon 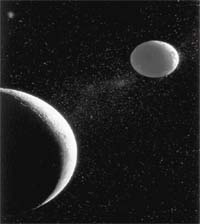 after Mars, the us National Aeronautics and Space Administration (nasa) comes back closer to home -- the moon. On January 7, a small unmanned spacecraft embarked on a trip to the moon 25 years after the last Apollo astronaut left the Earth's closest celestial cousin. This is the first mission in recent times designed exclusively for lunar exploration. One of its priorities is to find out if there is any water on the moon. The mission is being directed by the nasa's Ames Research Center in Mountain View, California. The spacecraft was built by the missiles and space division of Lockheed Martin Corporation.

The 296-kg remote-sensing Lunar Prospector probe, launched from Cape Canaveral in Florida, usa , will circle the moon at an altitude of 101 km and carry out detailed studies of the entire lunar surface. The us $63-million project of nasa has been principally financed by Alan Binder, director, Lunar Research Institute in Gilroy, California, a private, non-profit institute. A scientist for the Viking landings on Mars in the 1970's, Binder was also responsible for the concept for the mission and the craft.

After one year of operation, the Prospector probe will have the option to move out of its 118-minute, circumpolar orbit, to an orbit just 10 km above the lunar surface. The probe will carry out four experiments apart from trying to locate water ice on lunar surface using a neutron spectrometer.

"If the water is there within a metre of the surface, we will see it," said William C Feldman, physicist in charge of the neutron spectrometer research at Los Alamos National Laboratory, New Mexico. "We'll see a signature that has no other interpretation," he added. Scientists said the presence of significant amounts of lunar water ice should be detectable within a few days. But if there is no water, scientists will need to repeat measurements for months to be sure.

Discovery of water on moon could prove crucial to future space exploration. It would allow future generations to make rocket propellant on moon itself from electrolysis of oxygen and hydrogen. Such lunar-generated fuel can become an inexpensive alternative for propelling craft on round trips between moon and the Earth, and could also fuel an orbiting Earth station.

The Clementine mission, a 1994 joint venture of nasa and the us department of defence, had detected traces of water ice in the moon's polar regions. This probably sprung from the cometary impacts, which caused the ice from the comet's nucleus to vaporise and then condense at the lunar poles. According to Michael Mumma, planetary scientist at nasa, a lot depends on the extent to which the lunar craters (containing water ice) are shadowed, how much water ice is there, and whether that is enough for a rocket, or perhaps, a colony. Some lunar craters remain in perpetual darkness with temperatures well below -200 c.

The spacecraft also carries two other instruments developed by the Los Alamos laboratory. One is a gamma ray spectrometer that will map the amounts of many chemical elements in the lunar crust. Its measurements will help scientists understand the moon's origin and evolution, and could also provide useful information to future explorers about where to find useful metals such as aluminium, iron, uranium and titanium. The Apollo missions conducted a similar survey, but only in the equatorial regions.

According to Binder, any future mining on the moon will be for the moon itself, and not the Earth, as a lunar base would use "local" resources. Except for helium-3 -- used essentially to create tritium for "clean" burning in nuclear reactors -- there is nothing on the moon worth transporting back to Earth.

The Prospector will also seek evidence of the release of gases within the lunar surface that could signal imminent tectonic and volcanic activity. Although the Apollo missions did have a primitive system monitoring the moon's seismic activities, the studies in this regard are still in an early stage. The moon, according to Binder, can serve as a "very simple laboratory" for better understanding of the Earth's tectonic shifts and quakes.

A crucial onboard gravity experiment to measure the rate of flux as the satellite accelerates or decelerates over the heavier lunar masses will help scientists better understand the uneven lunar gravity field. This would also give flight planners ways to economise and estimate fuel load requirements on future missions. nasa also hopes to acquire a better knowledge of the moon's uneven magnetic field through several tests that the probe will perform. The moon lacks the Earth's two-poled magnetic structure, and it is suggested that lunar magnetism stemmed from outside impacts that may have randomly magnetised the lunar surface.