The rage of humans 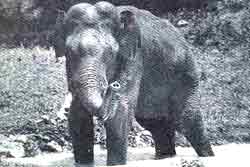 Depredating raids by wild elephants into human settlements have often been reported from Assam. But on August 13, the elephants became victims of a totally unprecedented retaliatory strike: Angry villagers poisoned three adult elephants in the vicinity of the Boronodi wildlife sanctuary in the Bodo-dominated Darrang district. Five other elephants of the herd, including a calf, also consumed the poison but are missing. Wildlife officials of the state believe them to be in a critical condition.

The authorities have recovered the bodies of the three elephants and are making arrangements for postmortems, while search parties are combing the Boronodi sanctuary for the other pachyderms.

Assam's chief conservator of forests (wildlife), R N Hazarika, estimates that this year alone, 21 persons have been killed by elephants of the Boronodi sanctuary, who have also damaged crops and homes in villages.

Hazarika says the rapid increase in the wild elephant population in the region and the continual depletion of forests have resulted in the shrinking of the pachyderms' habitat. Other officials point out the problem was aggravated when the Union government banned the capture of elephants -- a traditional practice in north-eastern India. In fact, this year, the state wildlife department itself recommended the capture of a specified number of elephants to keep the pachyderm population down, but there has been no response from the Union ministry of environment and forests.