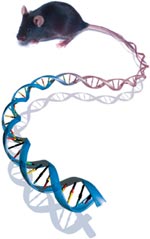 T he animal in us may just be a rat. A team of researchers from the National Human Genome Research Institute (nhgri) and other universities in the us has found the human gene code to be more similar to that of rats than cats. The project involved comparison of a stretch of human dna with similar stretches in the dna of 12 other animals including a chimpanzee, baboon, cat, dog, cow, pig, rat, mouse, chicken and some species of fish. "It provides pretty definitive evidence that we are indeed closer to rodents than we are to carnivores," said Eric Green, scientific director, nhgri. "In the sequence you can find changes in the genome that clearly occurred in both humans and rodents but not in others," he added.

The survey also highlighted the fact that the repetitive sequences of dna , so far considered useless "junk", may actually serve some important purpose. The scientists are to make a comparative study of 100 parts of the genomes in 13 species.