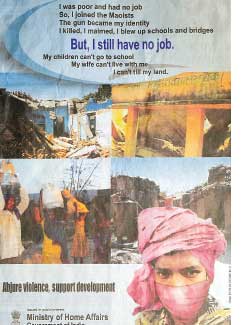 The Union Ministry of Home Affairs has taken Operation Greenhunt to the media. On April 6 national dailies carried an ad denouncing Maoist violence.

Issued in “public interest”, the ad shows a youngster, framed in the backdrop of destroyed school buildings and houses, who repents taking up guns against the state—its development projects in fact. Schools figure prominently in the rubble. Echoing the familiar government refrain that attendance of students dropped heavily as parents are reluctant to send their children to gun-guarded schools, the ad makes a plea to “abjure violence, support development”.

Amitabh Bakshi, a former adman, who now researches on the media as a sociology student, thought the ad was an intelligent attempt to “obfuscate the violence of development while placing the blame of destruction squarely on Maoists.” Bakshi thought it was interesting the repentant militant in the ad was a youngster.

“The home affairs ministry seems to be targeting a support group in its fight against Maoism.”