The return of a scourge 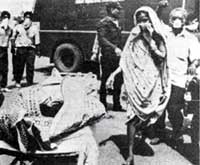 When an outbreak of plague was initially reported in the second week of September from Maharashtra's Beed district, close to Latur, which was ravaged by an earthquake late last year, the state government initially denied the incidence of the disease. Even Union health ministry authori ties chose to ignore a report by the Delhi-based National Institute of Communicable Diseases (NICD), that the inefficient disposal of the bodies of quake victims had created favourable conditions for Yersina pestis, the bacterium responsible for bubonic plague. According to the report, rodents in the region had become active carriers of the bacteria.

The inertia in various quarters, however , changed to frenetic activity with the outbreak of the dreaded disease in Surat, Gujarat, on September 22. As city hospitals choked with suspected cases, the disease reportedly claimed 50 lives the first day itself. Much of Surat's 3.5 million populace chose to head for Bombay, adding to fears that were ram- pant among Maharashtrians by then, that an epidemic of massive proportions was to break out. Indeed, this opinion gained ground wherever the fleeing Surat residents went. The Delhi government immediately declared a "red alert to ward off any suspected effect of the scourge" in its own territory.

Although several study teams of the Union health ministry, the Maharashtra and Gujarat governments, and research institutions, including the nicd, have descended on Surat, they have been so far unable to identify the cause of the plague, or even determine if it was connected to Beed. Their reports are awaited. Meanwhile, 8 million capsules of tetracycline have been airlifted to Surat and 2 million to Beed. The Gujarat government has also made arrangements for the immediate import of 50 tonnes of cymo gas, one of the strongest anti- rodent fumigates, from South Africa.