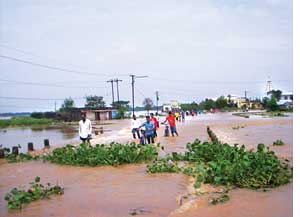 Orissa's floods made worse by full tank at Hirakud dam

It is difficult to get monsoon waters to stay within limits set by the government. It is perhaps even more difficult to set the right limits for storing water in a dam reservoir--the volume of water stored has to be right for irrigation needs in a bad monsoon year, it has to be right for preventing floods during an abundant monsoon. When the calculation goes wrong, like it did this year, it leads to large-scale devastation.

The flood in Orissa's 19 districts where more than four million lives have been dislocated is a result of such miscalculation.

The water authorities prescribed that the Hirakud dam reservoir on the Mahanadi be maintained at full capacity by September end. Accordingly, the filling process began on September 1; the water level was kept close to the brim all through the month.This worked fine in other years as the rainfall kept up with the government's calculations. This year's heavy rains proved all calculations wrong as a full reservoir left no room for flood mitigation. Large amounts of water had to be released from the dam causing havoc with lives of the people.

The Hirakud dam reservoir on the Mahanadi was practically full when heavy rains lashed Orissa on September 16. Even when the met department warned that a heavy downpour would follow the low pressure forming over the Bay of Bengal the engineers maintained the water level close to the brim.

Himanshu Thakkar of South Asia Network on Dams, Rivers and People said the floods could have been avoided or at least its impact hugely reduced had the dam operators maintained the reservoir's water level in keeping with the weather conditions. The 192 metre reservoir was kept almost full all through September as per the level prescribed by the government. The reservoir water was at 191 metre till September 11, thereafter it was 191.7 metre leaving a cushioning of only 0.9 metre and 0.3 metre, respectively.

Earlier the filling of the Hirakud reservoir began on September 1 and a full reservoir level was maintained by the end of October. This was changed in 1988 as there were years when the reservoir could not be filled because the rainfall was scanty. The water authorities now prescribed the reservoir be brought to full capacity by the end of September leaving little cushioning against floods.

The dam authorities said it was not always possible to get the water level on the mark. "We must remember one thing," said Harish Chandra Behera, engineer-in-chief of Orissa's water resources department. "Hirakud irrigates an area of 0.15 million hectare and generates around 360 mw of power."

As administrators study their calculations on water, more that four million flood victims struggle to stay above it. Sushanta Jana of Jajpur district rowed eight km on a raft made of banana trunks to fetch powder milk for his three-month-old. He was fortunate he prevented him from starving to death.

Qutubuddin Khan, also from Jajpur, swam through neck-deep water to buy food for his seven-member family. They have taken shelter on a hill overlooking their village. Their cycle of misery has just begun. Soon there will be disease outbreak and then, once the water recedes, they will have to rebuild their lives.

All this because the government could not get the water calculations right this year.