The right to develop 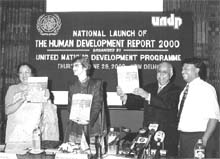 The United Nations Development Programme's (UNDP) human development report for 2000 has for the first time linked human rights to human development, particularly in the poverty eradication sector. "Human rights is not, as has sometimes been argued, a reward of development. Rather they are critical to achieving it," says Mark Malloch-Brown, UNDP administrator, in his foreword to the report. Focussing on people's participation in decision-making, the report states: "The problems of poverty would never be solved unless the poor participate in decision-making."

With all praise for India's effective civil society and the judiciary, the report states that India is a "powerful example of the possibilities for the creative use of human rights instruments in social transformation". Referring to the rise of participatory and grassroots institutions, it says "In India more than one million women have been elected in Panchayat elections, reflecting the broad participation in local government".

The report, listing 174 countries in a human development index on the basis of longevity, educational attainment and income, ranks India 128th in the list - up four points from last year. It was released worldwide in the last week of June to coincide with a United Nations session in Geneva to review progress in eradicating poverty made since a 1995 social summit meeting held in Copenhagen.

While charting out priorities for human rights and development policies, it emphasises on ensuring civil and political rights, including participation in development process, "to empower the poor to claim their social, economic and cultural rights". Referring to civil society empowerment in different countries, the report has for the first time linked democracy to a better human development scenario. "Participatory government is crucial to successful development".

To bring home the point, the report uses the experience of the last century during which the world saw a major shift to the democratic form of governance: in 1900, no country gave all its citizens the right to vote, but by 1999 three-quarters of the world had embraced democracy.

It shows that political freedom enables the poor to gain a greater share of resources and access to basic health and education. On the other hand, this stake in society encourages people to strive for development resulting in more national income, the report says. "India has not had a famine since Independence because its democratic political process has not allowed the government to remain inactive in times of crisis."

The reference to India in the report is not a solitary 'case', rather it has demonstrated with numerous examples beginning with the Vedas till the reservation for women in the Panchayati Raj institutions - how democracy and civil society have contributed to human development.

However, the report has put India under critical reviews for its not so impressive development of the scheduled caste and tribes referred to as 'indigenous people' particularly in the education and social sector. In fact, India's rise in the human index list by four points is due to the rise in per capita income, and not due to any significant development in its literacy rate or standard of living and adequate nutrition and health care. Though India was able to reduce its income poverty from 54 per cent in 1974 to 39 per cent in 1994, the report notes, "yet widespread income poverty and inequality still exists."