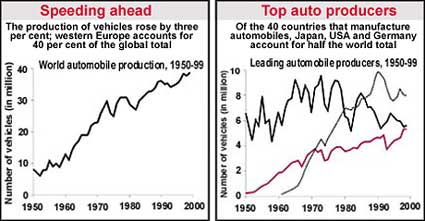 If vehicular emissions are to come down, governments will have to provide incentives to develop and promote the use of cleaner alternatives. In 1999, global passenger car production reached a record 39 million. The global car fleet now stands at 520 million. More vehicles will result in higher emissions. This is an alarming trend because particulates, especially from diesel engines, have been linked to many diseases, including cancer. Unfortunately, the production of cleaner alternatives like bicycles has continued to drop -- global bicycle production plummeted by 16 per cent in 1998, compared to 1997. However, sales of electric bicycles set a new record in 1999.