The role of genes

... in the making of an alcoholic is established by measuring the preference for alcohol in genetically bred mice 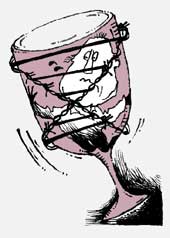 studies over the past eight decades have shown that an individual's inherited characters play a strong role in suggesting whether he or she will become an alcoholic or not. This suggests that a person's genes have a role to play in the onset of alcoholism.

However, genes by themselves cannot tell the full story, because all that they can say is restricted to predispositions. The development of alcoholism involves many other 'environmental' influences. The balance between genes and environment is roughly even. Nevertheless, it is important to know which genes indicate a predisposition to alcoholism, because such information can open the way to early diagnosis as well as treatment.

J A Melo and colleagues at the Princeton University, in New Jersey, us, have identified two potential genes in mice that appear to influence preference for alcohol. The basic experiment involved offering highly inbred mice strains -- and therefore genetically very similar -- a choice between a 10 per cent ethyl alcohol solution and water, whenever the animal felt like having a drink. Individuals belonging to most inbred strains took a swig of alcohol now and then but did so in moderation: the amount of ethyl alcohol that they consumed varied from 15-25 per cent of their total liquid intake.

However, two strains displayed marked differences from this norm. Mice belonging to one strain (b6) showed a strong fondness for alcohol; 75 per cent of their total liquid intake was made up of the 10 per cent ethyl alcohol solution.

In contrast, the alcohol intake of mice belonging to strain dba/2j amounted to just seven per cent of the total. Assuming that the observed difference between these two strains has a genetic basis (if only partially), the genes in question would appear to have a quantitative effect (as opposed to an all-or-none, qualitative effect). This supposition was verified when the progeny resulting from matings between the two strains were tested; their alcohol preference was intermediate and averaged at 23 per cent.

The next step consisted of what is called typing at microsatellite loci. Broadly, this means that the workers examined the entire genome for evidence of linkage between known small portions of the chromosome and the level of alcohol preference. They ended up with two localised regions tentatively identified as genes (even though as matters stand they are just portions of dna). One of them, alcp1, acts only in males and the other, alcp2, only in females. (Among humans there is no difference between the sexes in respect of the heritability of alcoholism).

Even though the nature of alcp1 is still a mystery, a gene known to encode a protein that helps in transporting a neurotransmitter, serotonin, lies smack in the middle of alcp2. Interestingly, brain serotonin levels are consistently depressed in the strain of rat that prefers alcohol. Also, in humans, low serotonin turnover appears to be associated with a certain form of alcoholism found at an early age. These observations offer hints that a search for the serotonin transporter gene in humans might be worth making as part of the attempt to understand the genetics of alcoholism.