The state of welfare

Is the UPA government on social overdrive? 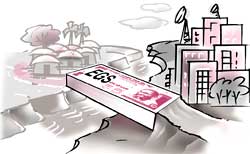 the National Rural Employment Guarantee Bill (nregb) 2004 passed by Parliament in August 2005, makes India the only developing country to have legislation ensuring livelihood. Once it is notified, an Employment Guarantee Scheme (egs) will come into being under which one person in each rural household will be assured employment for 100 days per year.

Prime minister Manmohan Singh calls it a "path-breaking" legislation. By involving the panchayat in its planning, monitoring and implementation, egs will empower the common people. Work taken up under egs will streng then the rural infrastructure through activities such as building roads, check dams, irrigation systems and health facilities. Union minister for rural development Raghuvansh Prasad Singh said in Parliament that egs should not be seen as a substitute to agriculture. The income from egs will be in addition to that from agriculture (for farm workers during the lean season) and can help improve the quality of rural life and reduce migration to urban areas.

egs also requires one-third of the employment be reserved for women. This will accrue benefits like improvement in health and primary education. But not everyone thinks egs will work.

Critics give the example of Maharashtra, which has an Employment Guarantee Act since 1977. Similar to egs, the act, according to Sharad A Joshi, member of Parliament from Maharashtra, is synonymous with corruption. "Corruption is not unexpected when money is involved and the transaction is between officials who control the funds, and the poor, unemployed labour who would be willing to take only a share of whatever is due to him or her," says Atanu Dey, a development economist. egs provides an important role to panchayats in its implementation. But the block level programme officer and district coordinators, who will handle the funds under egs , are not accountable to panchayats. To make the scheme transparent, "Names of persons employed under egs, hours worked, wages paid and the assets built must be posted for public scrutiny," suggests Kamal A Mitra Chenoy, professor at the School of International Studies, Jawaharlal Nehru University, New Delhi. Other experts believe that for egs to be successful, it should replace existing poverty alleviation programmes like National Food for Work, which are mired in corruption (see 'Sham, sham', Down To Earth, July 31, 2005). United Progressive Alliance (upa ) chairperson Sonia Gandhi, in her maiden speech in Parliament on nregb, emphasised the need to link Bharat Nirman, a scheme to develop rural infrastructure, with egs.

The Rs 40,000 crore- egs will require state governments to bear 10 per cent of the cost, while the Union government will take care of the rest. But even the 10 per cent could be difficult to manage for the states. Civil society organisations and experts have been demanding the Centre take the entire financial responsibility for egs. However, even the Union government admitted in Parliament on August 24, 2005 that it is finding it difficult to fund egs. Singh has said the funds raised through economic reforms would be made available to egs.

Economists feel egs would divert funds from infrastructure development to support India's growing economy. "The egalitarian philosophy of the government and economic reform policies are not one and the same,"says N Mohanan of Hyderabad's National Institute of Rural Development.

So far, economic reforms have failed to generate desired level of employment. The 1990s experience shows decrease in jobs with growing economy -- even in the agriculture sector (see 'Jobs, jobs, jobs', Down To Earth, November 30, 2004). egs will provide a new approach to increase the country's employment potential, feels Chenoy. The key livelihood areas of forestry, livestock, fishery and horticulture can contribute to creating large-scale employment opportunities in rural areas. "Benefits seem to be huge, when providing employment as a matter of right. But this will be possible only when 'work' included in egs is seen in a wider perspective," says Chenoy.

Another issue is whether we need to make egs more universal. It would have been better had the government included urban lower middle class and semi skill/soft skill workers under egs , says Chenoy. Even in rural households, say other experts, individuals should have been treated as separate units rather than families, or at least one individual among four in a family. In its present form, egs could lead to division in joint families. However, Singh said in the Parliament, "100 days can be divided among the individuals in a family."

Some experts suggest unskilled workers employed under egs could also be given vocational training through public-private partnerships. The trained workers could then be absorbed in private organisations, failing which they could always avail the 100 days of employment under egs.


In an attempt to make its pro-poor agenda ubiquitous, the upa government is working on overdrive. After the flights of fancy of the 'Bharat Nirman' and 'Rural Employment Guarantee' schemes, the government is now conjuring up massive provisions for unorganised sector workers, through the Unorganised Sector Workers' (Social Security) Bill 2005 and Unorganised Sector Workers' (Conditions of Work and Livelihood Promotion) Bill 2005.


These two new acts replace the single Unorganised Sector Workers' Bill proposed in 2004 by the National Democratic Alliance (nda) government. Considering the 37-crore workforce of the informal sector in India, the government is hoping two separate acts will better provide for their massive target population. Acting chairperson of National Commission for Enterprise in Informal Sector (nceuis) K Jayashankar says he felt "the major problem with the earlier bill was that it transposed the conditions of the organised sector to the unorganised sector and did not deal with the social security aspect in an exhaustive way." nceuis has proposed the two bills after nine months of analysis.

The nda leadership is up in arms over its rejected bill, claiming that its replacement jeopardises their pro-poor initiatives. However, M K Pandhe, the president of the Centre of Indian Trade Unions, asserts that the earlier bill did not ensure comprehensive social security through minimum wages, decent working conditions or job security, and hailed the nda bill as synonymous with the jobless growth syndrome that is becoming a pattern of the fast-growing Indian economy.


The Unorganised Sector Workers' (Social Security) Bill covers all unorganised sector workers with a monthly income of Rs 5,000 and below. It covers health insurance, maternity benefits, life insurance and an old-age pension. The scheme will be run through a central social security board, assisted by state boards and administered at the local level through workers facilitation centres, where the workers will be registered and issued with identity cards.

The issue of contributions is crucial. According to the act, a registered worker will only be eligible for benefits if he has paid his regular contribution, pegged at Re 1 per day. The employer and the government will each add Re 1 per day, creating a cover of Rs 1,095 per worker per year (see: Too small a price). The implementation of this seems potentially problematic.


"With India slated to become world's second most preferred manufacturing house, labour rights need to be protected the right way," says deputy chairperson of the Planning Commission, Montek Singh Ahluwalia. The Unorganised Sector Workers' (Conditions of Work and Livelihood Promotion) Bill attempts to fulfil this, promising the right to organise workplace safety, non-discrimination in wages and freedom from sexual harassment. Self-employed workers are promised easy credit, use of common property and access to natural resources. The bill suggests the creation of Dispute Resolution Councils with the powers of civil courts in every district of the country.


Unlike previous legislation targeted at unorganised sector workers, like the Minimum Wages Act, Workmen's Compensation Act and the Contract Labour Act, which have failed to bring about major changes, nceuis is confident about the two acts' success due primarily to their job protection and social welfare benefits. "This makes these two proposed legislations a relatively complete solution touching upon the core of the issue," says Jayashankar.

However, director of the Rajiv Gandhi Institute of Contemporary Studies, Bibek Debroy believes that India has a pathology of over-legislation and it doesn't help because this goes hand-in-hand with under-governance, hardly the way to tackle social problems. Application of such well-meaning legislation remains intensely problematic.