The stuff of Cinderella's slippers 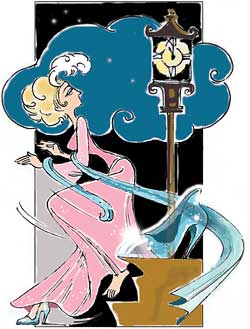 They were made of glass that did not crack, researchers have recreated it

cinderella danced for hours at the prince's ball. Her glass slippers did not wear down. Their heels did not break. As the clock struck 12, they aided in her escape and survived that as well. Although a fairy tale, it hasn't failed to inspire researchers the world around, who spent decades trying to recreate the magical glass. Eventually, they came up with metallic glasses--metals that are amorphous, like glass. Although the scientists do not promise a new brand of footwear, they see many applications for this material.

Metallic glass is a metal, frozen in its molten form. In metals, atoms are arranged in an orderly form but when subjected to sudden cooling, the atoms do not get time to rearrange themselves. This gives rise to metallic glass with a random distribution of atoms and an amorphous nature.

Metallic glass was discovered in 1960 but the material could not be used extensively. Although very strong, it cracked when exposed to repeated stress. Its resistance to fatigue was low; only a tenth that of most metals.

In a metal, its crystalline structure prevents a crack from spreading. The crack needs to move from one crystal to another. This requires negotiating crystal edges, which taxes the energy driving the crack. Being amorphous and hence lacking such hindrances, metallic glass is more vulnerable. So, a group of four researchers in California thought it better to create a metallic glass that was not prone to cracks. They picked up from the work of some scientists a t the California Institute of Technology (CalTech), who had already alloyed five metals-- zirconium, titanium, niobium, copper and beryllium--and gave it a name: DH3. But it did not resist cracks.

The quartet from CalTech and the University of California in Berkeley combined the existing alloy with a new one that did not have beryllium. The result was a metallic glass with a network of narrow veins, somewhat resembling veins in leaves, of the second alloy. Running through the DH3 alloy, the veins break the spread of cracks.

It would be long before this metallic glass can challenge metals, but it can tolerate twice as much pressure as the best quality steel. Its resistance to fatigue is 30 per cent higher than that of ultra-high-strength steel. "As a building material, it changes our idea of living in glass houses," said Upadrasta Ramamurty, professor of materials engineering at the Indian Institute of Science, Bengaluru (see box).

The separation is critical; the spacing of these arrest points (veins) has to be small enough to arrest any crack before it becomes large enough to cause catastrophic failure, wrote lead researcher Maximilien Launey in the a release. The journal Proceedings of the National Academy of Sciences published the paper in its March 31 issue.

The paper did not talk about modelling the new material to fit Cinderella's feet. Even if slippers were fashioned from it, they most likely wouldn't be transparent.