Another 100 years and the world will begin to suffer from high fever. Utilising solar energy may prevent a catastrophe 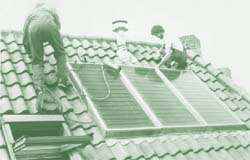 how long can the world's energy resources sustain a population of six billion? According to Worldwatch Institute reports, consumption of resources are so high that the world will probably run out of resources by the next century. The depletion has led to an increase in heat-trapping atmospheric carbon at the rate of six billion tonnes a year. The atmospheric buildup of carbon dioxide, which is already 29 per cent above the pre-industrial level, is expected to double within the next century.

In this dismal scenario, tapping solar energy is the only viable alternative. More so because implementation of the new solar technology will reduce the cost of cutting carbon emissions to 20 per cent below 1990 levels.

With increasing concerns about the environment and the need for implementation of the Kyoto Protocol, nations worldwide are looking for alternate sources of energy. Utilising the natural energy of the sun, wind and other primary sources of energy will not only be economical but will also rapidly improve the efficiency of energy. Many countries around the world are encouraging this system by providing generous incentives and subsidies.

While Japan and usa have already taken substantial initiatives in this direction, European countries like the Netherlands, Sweden, Germany and Norway are fast catching up. In fact, both the European Union and the us have announced "Million Roofs" programmes, scheduled for completion by 2010. With the introduction of this programme, carbon emissions will be reduced by an amount equivalent to the annual emissions from850,000 cars.

Solar market has grown ten times the rate of oil production. According to Worldwatch, " By 2020, the world solar market is expected to reach 10,600 megawatts if there is a constant annual growth of 25 per cent each year." Researchers at the Royal Dutch claim that the present world market of one per cent will increase to 5-10 per cent by 2020 and 50 per cent halfway through the century.

Japan is one of the highest solar power utilising nations where individual solar panels supply power to the local utility grid. The Japanese government actually subsidises the cost of a solar panel by about a third. This means that the price of a solar roof panel, which costs us $30,000, is reduced to $20,000. The consumers pay an additional $10,000 against the price of a regular roof, which usually costs $10,000. They are, however, exempted from power bills and can sell extra power.

According to Vital Signs, a book published by the Worldwatch Institute, Massachusetts, "between 1994 and 1998, some 12,000 customers took advantage of the Japanese government's cash subsidy for photovoltaic ( pv ) cells. More than 6,800 systems were installed in 1998." With government support, Japan hopes to install solar systems in 70,000 homes by the year 2000.

The scenario in the us , however, is not so promising. Despite being one of the leading manufacturers of solar cells, the nation has had little success in the domestic sector. Having launched the 'Million Roofs Program' in 1997 along with Europe, the us had hoped to increase demand for solar roofs in the domestic market. But so far, the market for photovoltaics have been largely restricted to non-residential applications. On the other hand, Switzerland has installed solar systems more than any other country.

At September's World Solar Summit held in Harare, president Yasser Arafat of the Palestinian Authority announced the launch of a new initiative to build a solar energy power system which would be the largest renewable energy project in the West Asia. Benjamin Mkapa, president of Tanzania, also announced that his country would set up an investment fund and offer a number of tax incentives for the use and production of solar energy systems.

The demand for pv cells is escalating worldwide -- it reached an all-time high in 1997, when the global shipment jumped 43 per cent higher from 1996. Says Molly O' Meara in a 1997 issue of Vital Signs : "This was the largest increase in the last 14 years and the fourth straight year of double-digit growth for pv cells."

According to Meara, the reason behind the increase is the highdemand from Japan where the government offers various subsidies and tax incentives.