Swapping cells can save ailing hearts 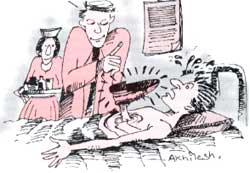 ONE DAY it may be possible to stave off the damage caused by heart attacks by using cells from the muscles in patients' arms and legs. Scientists have successfully performed this operation in rabbits, and hope to start human trials within the next 18 months. During a heart attack, heart tissue dies because it is starved of oxygen. This can later lead to total heart failure. Five million people live with chronic heart failure in the us alone. Patients become short of breath and their tissues swell up due to water retention. They require lifelong drug therapy.

So an effective way to prevent this condition would be a medical breakthrough indeed. "The quality of peoples' lives when they suffer heart failure can be more than miserable," says Doris Taylor of Duke University Medical Center at Durham in North Carolina, USA. Heart cells are generally thought to be unable to regenerate after damage. But Taylor and her colleagues wondered if immature cells or "myoblasts" from skeletal muscle in the legs, for instance, could take on the function of heart cells when transplanted into damaged heart tissue. To test if this process could really work, Taylor simulated heart attacks in 12 laboratory rabbits by using cold probes to kill the tissue. They then took myoblasts from the rabbits' legs, allowed them to divide, then injected them into the damaged muscle.

The team says that in seven of the rabbits, the myoblasts were still thriving over six weeks later. All seven rabbits pumped blood round their bodies more effectively, some up to four times as strongly as before the transplant. "This is the first time anyone has shown improved function as a result of a transplant," says Taylor. The hearts of animals that did not receive transplants weakened with time.

Taylor says her latest data show the transplanted cells are still thriving after 16 weeks. The area where the myoblasts were injected revealed tissue which produced the protein myogenin, characteristic of skeletal muscle. The tissue also had characteristics of cardiac muscle. David Menon of Addenbroke's Hospital in Cambridge, UK, says the results could be exciting if the transplanted cells are shown to live much longer. "Is this translatable to the clinical setting? I think the answer must be a cautious 'yes'," he says.

The Duke team plans to try the new technique on people who are due to have heart transplants. They have applied to Duke University Medical Center ethics board for permission to go ahead with these human trials.