A recent study highlights the need for better pollution control technology and stricter laws to curb the emission of minute particles of air pollution, which claim thousands of lives in the US alone 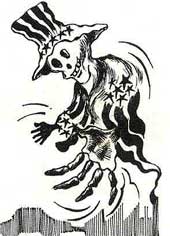 A TINY speck of particle floating in the air could ultimately send you to the grave. That air pollution leads to respiratory and heart ailments speeding up death, is a well known fact. But a recent study by an environmental group has revealed alarming facts about the lethal powers of seemingly innocuous fine particles of air pollution. According to the survey of 239 cities by the Natural Resources Defense Council (NRDC) in the us, tiny particles of airborne pollution cause 64,000 deaths nationwide every year.

The mortality rate due to particle pollution is the highest among people who already have breathing problems, including asthmatic children and some elderly people. According to the NRDC, coal-fired power plants are the largest source of 'fine particle pollution' in the us. The other culprits contributing to the pollution are diesel-burning trucks and buses, petrol-powered cars, industrial boilers and even wood-burning stoves.

In a country which takes pride in being in the forefront of environmental legislation, the study has thrown open a floodgate of debate on the laws which govern air pollution. The Clean Air Act of 1970, which was strengthened in 1977, considerably improved the quality of America's air. Cleaner cars and cleaner fuels have been produced in accordance with tough federal mandates. Still, it is now obvious, the war against air pollution is far from over. More than 5,000 lives in Los Angeles could be saved annually if more stringent regulations to curb small-particle pollution were enforced.

The existing laws have loopholes that let the finer particles to pass through. Pollution control laws like the Clean Air Act were essentially drafted to reduce the amount of all airborne microscopic particles that are 2.5 to 10 microns in diameter. (A human hair measures 100 microns in diameter.) Recent discoveries have shown that particles smaller than 2.5 microns in diameter pose the greatest health risk. These minute particles, when inhaled, are drawn deep into the lungs. They escape the body's natural defences and settle in the most fragile sections of the lungs, leading to serious respiratory ailments and even cancer.

An overhauling of the regulatory standard a standard that permits 50 micrograms of particulates per cu m of air does not cover the particles that have the most damaging effect on health - devised by the Environmental Protection Agency (EPA) to enforce the air pollution law has been proposed. NRDC said that a federal rule narrowing down the limit of particulates to 20 micrograms per cu m of air (in measurements averaged over a year) would save about 4,700 lives a year in the us, while a limit of 10 micrograms per cu m would save about 56,000 lives a year.

The new environmental legislation has been on the anvil for some time now. The EPA has been considering whether to issue new standards that would be strong enough to shield the public against these microscopic killers. Carol Browner, administrator of the EPA, had taken note of epidemiological studies, including a survey by the American Cancer Society conducted earlier. The recent study by NRI)c adds to the necessity of enacting new legislation as soon as possible. Said Browner, "This is a very serious issue, and we are moving ahead quickly to come up with conclusions. The science suggests that the smaller particles really are a problem". The EPA is likely to propose a new rule concerning small-particle pollution by November this year. It is expected to be ready for enactment next year.

However, tightening the noose of regulations alone will not deliver cleaner air. When new rules come into force, the us science and industry will have to come up with better alternatives to meet it. But grumblings can already be heard from industries that may have to make investments in new technologies for pollution control. For example, lithe American Mining Association dismissed the study saying that it was based Jon "junk science".

Before enforcing costly new regulations, the EPA will have to make sure that they are backed by solid scientific evidence. Studies identifying the small particles as deadlier than bigger ones are relatively new and small in number. But then, the industry always puts up a defensive front when confronted with environmental responsibilities. Hopefully, the industry's stand will not deter the EPA from coming up with the right regulatory weapon to fight the tiny killers.

While scientists may take some time to find an answer to fine-particle pollution, the solution to the problem of airborne soil particles could be at hand. The source of these particles had long remained unknown. But Ann Kennedy, a soil scientist with the us Agricultural Research Service in Washington, claims that she can identify the source of dust by examining the fatty acid content of the microorganisms clinging to the particles. According to John Bachmann, an EPA official, fatty acid profiling could play a crucial role in curbing air pollution.