The poor have not gained from India's economic growth, shows the UN human development report 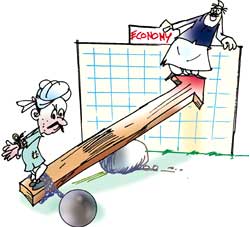 It also has the highest number of children who die before the age of five. We also fare poorly in other essential hdi.

2.5 million Indian children die before they are five, notes the hdr. I n contrast, 'least developed' Bangladesh has far lower levels of neo-natal mortality. India has an under-five child mortality of 95 per 1000 live births compared to 69 per 1,000 for our neighbour.

The report notes that child mortality was initially a problem for people across most classes in the Third World. Immunising children of the rich and the not-so-poor communities helped reduce the problem. "But once such low hanging fruits were collected, the problem became concentrated in populations that are more vulnerable and have less access to public policy interventions," write the hdr 's authors . T his is the main reason why only 42 per cent of Indian children have been immunised, even though it's more than 15 years since India's universal immunisation programme was initiated. The picture becomes even more grim if we consider that less than 20 per cent children are immunised in two of India's most populous states: Bihar and up.

Rampant gender inequalities throughout the country make the story further sordid. Indian girls aged one to five have half the chance of surviving than boys. Similarly, there are 4 million girls in the country who do not attend school while their brothers do. This inequality tells on their children's health. For example, the under five mortality rate is twice as high for children of illiterate mothers. Also, about one-third of Indian children are born underweight -- a sure consequence of their mothers' poor health. State disparities in achievement of hdi correspond to gender and health inequalities. For example, 123 out of 1,000 girl child born in up are likely to die before they reach the age of five, compared to 19 out of 1,000 in Kerala (see table: Kerala and the infamous three).

The country has more than 25 million children who should be in primary school but are not there. Further, two out of five first grade students are likely to drop out. Says educationalist Abraham George, "Many people who we claim are literate haven't learnt more than the rudiments."

India's over dependence on the services sector has made its growth 'virtual' for the millions of our poor, notes the report. The wages of the country's 23.4 agricultural workers have stagnated since the 1990s. The agricultural sector registered a growth of only 1 per cent in the last decade, the report points out.