The foetus can hear, smell and is sensitive to taste, but can it also feel pain? 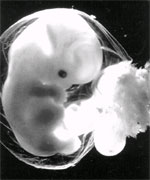 a report of the Commission of Inquiry into Foetal Sentience, a body set up by care, a British educational charity, says that at as early as 11 weeks period, a human foetus can experience some kind of primitive pain. This is in stark contrast to the belief that it is not until 25-30 weeks that the wiring of the brain and nervous system seems advanced enough for the foetus to feel pain ( New Scientist, Vol 152, No 2052).

Until the '80s, surgeons operated on new born babies without giving them painkillers as they thought it unnecessary. Now, there is a debate in the medical community on whether foetuses should be given painkillers when they are operated upon in the womb and during abortions.

Operations to correct problems such as defective heart valves in unborn foetusus as young as 24 weeks, result in a huge overlap in the gestational age of foetuses and premature babies. While operations on premature babies involve doses of pain relief, the foetus depends on whatever drifts across the placenta from its mother.

Vivette Gliver, a specialist on biology and psychology of stress and her colleagues at the Queen Charlotte and Chelsea Hospital in London are giving painkillers to foetuses undergoing potentially painful surgical procedures.

Surgeons give opiod-like drugs to foetuses when they need life saving blood transfusions in the womb, most often to treat a severe type of anaemia. This procedure done on foetuses aged 19 weeks onwards requires a needle to be passed through the mother's abdomen and deep into the foetus's abdomen, an area rich in nerve fibres. The surgical procedure triggers a surge of hormones and chemicals in the foetal blood stream -- substances released in adults and children while in pain or stress.

The levels of cortisol and beta endorphin, natural pain killers, raise three fold and five fold, respectively, in the 40 or so minutes the needle stays in the abdomen. A rush of blood to the head of the foetus and a marked increase in the levels of adrenaline also point towards stress. Doctors argue that during full blown surgeries and abortions, the mother is given general anaesthetic, so the foetus automatically gets some pain relief. But nobody has tested as to how well the painkillers cross the placenta.

This issue of pain has focused attention on the relationship between foetal distress and abnormalities at birth. There is accumulating evidence from physiology suggesting that the neurons of the spinal cord go through a critical period of training early in life. Excessive exposure to pain stimuli within this period could do long lasting damage. Therefore, it is necessary to rethink on the use of painkillers during foetal surgery