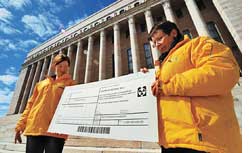 The Finnish energy company TVO has asked the police to investigate whether environmental group Greenpeace had committed a crime by distributing fake electricity bills bearing its name. In the last week of June, Greenpeace activists distributed some 20,000 leaflets resembling electricity bills around Finland in a campaign against a delayed nuclear reactor project in the country. The leaflet warned electricity bills in Finland would increase by more than 50 per cent because TVO would raise prices to cover the cost of the delays--the project is running late by three years. "They have used our name in ways that have confused people," TVO spokesperson Anne Lehtiranta said.

Lauri Myllyvirta, Greenpeace's campaign manager in Finland said, "Some people were angry about the way the campaign was carried out, but others feared a hike in electricity prices."