Pesticides pollution threatens the aquatic life of the Ganges, especially the Gangetic dolphins 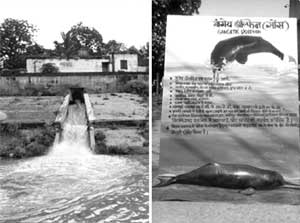 "sauns sabhi ko pyari hai, Ganga maiya ki sawari hai ." This is the constant chanting that follows every splash of water as fisherfolk in Patna nudge their boats along the banks of the Ganges. And the hymn simply denotes a truth: Gangetic dolphin is dear to all and it is the vehicle of the mother Ganga. Ironically, these fisherfolk are oblivious to the fact that the Gangetic dolphin -- locally known as sauns -- is a victim of high levels of pesticides, which is one of the possible reasons behind their high mortality rate in the country.

Surface run-off and city sewage containing high levels of pesticide residues are posing severe hazards for the aquatic life of the holy river. The pesticides can be found at every level of the river's foodchain. The Gangetic dolphin (platanista gangetica), a species declared endangered by the World Conservation Union (icun) , is particularly vulnerable to the threats from these pesticides. The dolphin indirectly consumes the pesticides while eating fish, molluscs and insect larvae, especially that of gomphus. The animal, being at the top of the foodchain and having a thick layer of sub-cutaneous adipose tissue, accumulates maximum persistent organic contaminants that are highly soluble in lipids. This accumulation is a result of successive bio-magnification at different levels. The lipid soluble organic pesticides primarily accumulate in the dolphin's blubber, an extensive fat layer just below the skin. Mammals have some capacity to de-activate and remove a limited amount of toxic substances from their bodies. However, despite being mammals, most of the dolphins are poorly equipped to encounter this mechanism as they lack most of the essential enzymes required for it.

While investigating the pesticide residues in the tissues of dolphins from different locations in Bihar, investiga tors found a maximum of 64,000 parts per billion (ppb) of dichlorodiphenyltrichloroethane (ddt) residue in the blubber of a calf dolphin. The concentration of polychlorinated biphenyls (pcb) in the blubber of the same calf was 13,000 ppb. A maximum presence of 1,900 ppb of hexachlorocyclohexane (hch) was reported in the blubbers of dolphins found in Patna. The levels of pcbs, ddt and hch in the milk collected from the intestine of a dead calf were found to be 620, 4,800 and 400 ppb respectively. The dolphins, whales and porpoises lactate high fat content milk that helps in rapid growth of their calves. Such high fat containing milk provides an ideal medium to lipophillic organic pesticides to get accumulated. This strongly affects the physiological growth of the young.

Anupma Kumari from the Environmental Biology Laboratory of Patna University conducted another study, the results of which are mind-boggling. She found that 13.6-1,665.9 ppb ddt was present in the Ganges fish. Even the levels of hch and endosulfan pesticide were found to be very high. Moreover, this phenomenon not only affected the humans who consumed these fish but the fish eating bird population even seemed to be at high risk. Due to pesticide toxicity and consequent decrease in calcium adenosine triphosphate, their eggshells have thinned considerably. This is adversely affecting their reproduction.

Environmental biology laboratory of Patna University, Bihar, department of environment conservation of Ehime University, Japan, and the Institute for Environmental Technology of the Michigan University, usa, had in 1998 also conducted a study about the pesticide pollution. Their study revealed the presence of pcbs and organochlorine pesticide residues in high concentration in the sediment and fish of the Ganges.

These are not the only studies conducted about the pesticide menace faced by the river, which is a symbol of India's cultural heritage. There are many more. However, they fail to evoke a response from the authorities and the failure of Ganga Action Plan is a proof of this. According to experts, if the pesticide pollution is not contained, the Ganges may soon be bereft of all its aquatic life.