The value-addition of a clean-up 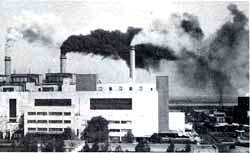 TO AID industries in preparing their annual environmental statements, a new concept of waste minimisation circle (WMC), in which member units will share their expertise and experiences in resource conservation, is to be introduced soon by Indian industry associations, institutions and the government. The statements, which are to be submitted annually to the respective State Pollution Control Boards (SPCBs) by September 30 for the previous financial year, will be prepared by conducting an environmental audit.

The environmental audit notification was issued by the ministry of environment and forests (MEF) in March 1992 and amended in April 1993. The audit will take stock of the raw materials consumed, product output, wastes generated, methods of waste disposal, and the environmental impact of the industry on its surroundings. A profile of the company's environmental management system, the status on compliance with standards and a study of the risks and waste utilisation will be drawn up.

WMCs were meant to increase awareness about the compulsory statement and to help small-scale industries that are struggling to arrange the wherewithal to conduct environmental audits.

Says K P Nyati, adviser, environment, Confederation of Indian Industries (CII), a WMC will comprise several units in the same industrial cluster -- such as tanneries in Kanpur or electroplating units in Madras. Each WMC will be headed by an entrepreneur who is a local opinion leader committed to environmental improvement, and will champion the cause of waste minimisation in the cluster.

A WMC will get audit training and advice from the government and industry associations. The maintenance of a log-book is expected to establish an auditing process which can systematically continue. "We hope that there will be a multiplier effect in the industry,," says Nyati. The WMCs will involve district industrial centres and the existing network of small industries' support institutions to generate a mass movement.

Nyati says, "For the first time the government has introduced a proactive approach to the conservation of natural resources, rather than a command-and-control approach." But, according to S P Chandak, director, pollution control, NPC, "The environmental audit notification was hurriedly put into force without first creating the necessary back-up awareness and expertise which would allow its proper implementation." He feels that the method of implementing the environmental audits has "killed a most laudable concept".

With a first-time environmental audit costing between Rs 75,000-200,000, which will take a medium-scale industry 15 months to complete, and the lack of trained environmental auditors, "small units are finding it difficult to cope," admits Nyati.

The CPCB has, however, conducted model audits in 120 industrial units in the 18 highly-polluting industrial sectors like cement, distillery and leather processing.

Unfortunately, although the notification has been in force for the past two years, only 2,995 statements were filed upto December 1993, although 113,760 industries countrywide received operational consents in the same period. The Indian government, being the first in the world to enforce audits, "is not just a pioneer but one that leaps before it thinks," says the Delhi-based head of a leading pharmaceutical company. The biggest hitch to the filing of environmental statements is their submission to pollution control boards. MEF officials assure that "the information contained in the statement cannot be used against the industry by the authorities. The consent mechanism -- or no objection certificate -- already exists to enforce compliance with environmental laws."

However, the Delhi-based industrialist points out, "I would be reluctant to file my transgressions with the pollution control board, which I know only as an enforcer, not an adviser. The board can harass me sooner or later. Or I would try to make certain that my statement matches the consent form. Moreover, if audits are for the management of the industry, why make their submission compulsory?"

The MEF reveals that not a single industry has been penalised yet. "Punishment would not be fair because not many industries are even aware that such a law exists, nor are they qualified to hold an environmental audit," say officials. Counters Chandak, "This awareness and expertise should therefore have been created before the notification was issued. Even the WMC scheme will be too localised to have an impact quickly." Further, says J S Ahuja, audit adviser, corporate, in Apollo Tyres, "India is the only country which requires industries to hand over their production secrets to competitors on a platter. Indian drug and pharmaceutical companies, in particular, are afraid that with the entry of multinationals, they would be losing their valuable trade secrets."

Chandak points out that several parts in the statement's proforma are "obviously vague". For instance, the proforma requires to know the quantity of raw material consumed in relation to the output. This excludes materials such as lubricating and cooling oils or catalysts which are highly polluting but do not form a part of the final product. Claiming that the statement is a "management threat instead of a tool," Chandak says Indian industries are not yet qualified to provide the sort of detailed information it requires.

Acknowledging some of these criticisms, minister of environment and forests, Kamal Nath, announced at a seminar held recently at CII that the ministry would consider changes in the format of the audit statement which had earlier been drawn up following consultations with the industry.

Chandak points out that a trained cadre of environmental auditors, similar to chartered accountants, should first have been created. "There are no qualified environmental auditors in India, nor government officials qualified to analyse the data." The purpose of the auditing exercise is defeated, he feels, because the statements submitted are "gathering dust in the shelves of government offices, whereas audit information should be used to draw up sectoral profiles and help the government formulate policies based on this data."

The CPCB, however, contends that it will soon begin an extensive exercise to compile and analyse the data available with SPCBs. The industries will then be given feedback of an advisory nature. Although Chandak asserts, "The system of environmental statements seems to have failed at the very beginning," only analysis of the statements submitted will deliver a final judgement on whether the government was too hasty in forcing resource conservation, thus relegating it to a perfunctory form-filling exercise.