It may never be possible to eliminate HIV from infected people 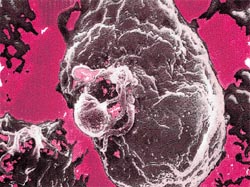 in the last 18 years, hiv or the human immunodeficiency virus has evolved into a major health concern. As many as 11 drugs and drug combinations have been pursued to suppress the development of hiv- related disease, only to help those infected with the virus live longer, more productive lives.

Unfortunately, this optimism appears to be doubtful if a recent study by Line Zhang and his team from the Aaron Diamond aids Research Institute in New York, usa , is to be believed. The study suggests that it may never be possible to completely eliminate the virus from the infected. Small amounts of hiv may still hide in certain white blood cells, even in patients whose blood 'appears' to be free of the virus. Further, in some patients, these bits of virus continue to evolve and slowly replicate (The New England Journal of Medicine , Vol 340, No 21).

The researchers studied eight patients, who had been 'treated' with the powerful 'highly active antiretroviral therapy' ( haart ) for at least two years. When this combination drug therapy first appeared, doctors had hoped that it would turn out to be a cure for the virus: if the viral levels continued to decrease, the virus might ultimately be eliminated from the body. But, according to the new finding, while the virus appeared to be completely eradicated from the eight patients' bloodstreams, all eight had traces of the virus lurking in certain long-lived white blood cells and two had copies that were showing signs of replicating.

The researchers carefully scrutinised individual white blood cells to determine whether there were lingering traces of the virus in people with no measurable virus in their plasma (the liquid portion of blood usually used to screen for viral load). Six of them had latent (or resting) copies of the virus, while in two patients the virus showed signs that it was evolving and replicating, Zhang reported. Researchers can tell if a virus is replicating by looking for mutations in the virus over time. As hiv makes copies of itself, it makes mistakes and changes to correct the mistakes.

Researchers compare what virus particles look like over time. If there are genetic changes, it means the virus is reproducing, rather than lingering in a latent state. The bottom line is that whether the copies of the virus are replicating or asleep, they represent a persistent reservoir of hiv that is not being eliminated by the drugs, which are good at suppressing levels of free virus in the plasma.

"This is very sobering news. The goal of completely eradicating the virus from a patient becomes more problematic if there is a reservoir of virus that is continuously replenished," says Anthony Fauci, a leading aids researcher and director of the National Institute of Allergy and Infectious Diseases in Bethesda, Maryland, usa .