The will is there, but not the funds

India has prepared a detailed plan to phase out chemicals that destroy the ozone layer, but its implementation is subject to aid from the Multilateral Fund 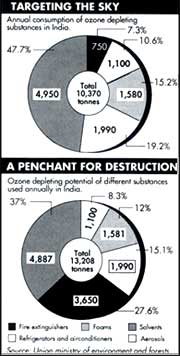 GOADED by developed countries, the Union ministry of environment and forests (MEF) has prepared the first draft of the India Country Programme, which details the phase-out schedule of ozone depleting substances (ODS) under the Montreal Protocol. According to the programme, the switchover, which will take till 2010 to effect, will cost an estimated $1.639 billion (at 1993 rates).

MEF joint director Indrani Chandrashekharan says, "India's accession to the Protocol is still contingent on assistance for funding the component of incremental costs, including transfer of technology, from the Multilateral Fund, availability of substitutes within the country and development of related technologies." However, she adds, the programme reflects India's commitment to comply with the Montreal Protocol.

The draft, which was prepared with the help of the Tata Energy Research Institute, estimates India's total ODS use in 1991 at 10,370 tonnes. ODS are used mainly in sectors that produce consumer goods and services, such as refrigerators and electronic devices. Chlorofluorocarbons, such as CFC-113 and carbon tetrachloride, which are used as solvents in electronics, pharmaceuticals, pesticides and the rubber industry, account for 47.7 per cent of total ODS use.
The draft notes that CFC-using goods are bought largely by the richer classes, who account for 50 per cent of the national income and will number more than 45 million households in 2000 and about 60 million in 2010 -- equal to the total number of households in Germany, France and Britain at present. This group would sustain an annual growth rate of 15-20 per cent in most consumer goods and services over the next 20 years.

According to the draft, CFC-11 will be phased out first -- by 2007. All the other ODS will be phased out by 2010, except MCF, a solvent with applications in various electronics and precision industries. MCF will continue to be used beyond 2010 at the rate of 400 tonnes a year.

Noting that India is the second-largest producer and consumer of ODS among developing countries, the draft, however, points out that the present level of CFC consumption is less than 10 gm per capita and is not likely to cross 20 gm between 1995-1997, as against the 300 gm permitted under the Montreal Protocol.

Given the CFC consumption patterns in India, the draft says alternative technologies would require a process of adaptation before they can be commercially deployed. To ease the transition, testing and evaluation centres would be set up in the first stage of the phase-out programme, and later, incentives and regulations would be used to develop indigenous alternate technologies.

In the refrigeration sector, the cost to users to service and refill refrigerants will increase when non-ozone-depleting, substitute refrigerants, such as hydrofluorocarbons HFC-134a or HFC-152a, are used. In the case of domestic refrigerators, costs of replacement, premature modification and of recovery and recycling of ODS have been taken into account in the incremental costs estimated for the switchover.

The small-scale and informal sectors account for about two-thirds of total ODS consumption in India. As these are decentralised and dispersed and use old technologies, reaching out and facilitating their phase-out will be difficult and will cost 2.5 times more than that for larger units, according to the draft.

In the case of producers of chemical substitutes, costs of patents, designs, retraining and research to adapt technology to local circumstances, and the capital costs of conversion and establishment of new units have been included in the incremental costs.

Ministry sources point out that notwithstanding the activities planned for the different sectors, the key element would be technology transfer from the developed countries. Though the draft calls for transfer of the patents required for the manufacture of HFC-134a, HFC-152a, HFC-23, HFC-32/143 and various HCFC compounds, officials admit the report is weak on further details of the technology transfers that India may expect from the industrialised countries. They say that this lacuna will, however, be taken care of by the recently constituted inter-ministerial steering group on the phase-out of ozone depleting substances.