Mycorrhizal fungi can improve the quality and longevity of plants 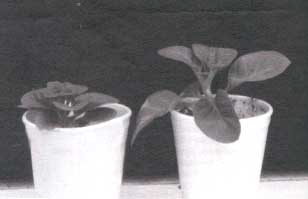 MYCORRHIZAL fungi or 'fungus root' are crucial for plant growth as they help in better root performance and provide natural defence against root diseases and pests. The fungi work as an extension of the plant's roots to help take up soil nutrients and water in exchange for steady source of energy. The relationship between the plant and the fungi has evolved over hundreds of years in natural forests and has helped both survive drought, high soil temperatures and increase longevity of the root functions.

The School of Life Sciences, Jawaharlal Nehru University (JNU), Delhi, is currently involved in research to grow Arbuscular mycorrhizal fungi (AMF) in such a way that it can service the plant with which it has to grow on a defined synthetic medium. The aim is to commercially multiply it for use in forestry, agriculture, floriculture, viticulture and arboriculture.

In the present age of tissue culture, millions of plants are grown by transferring them from laboratory to the field. Transplant failure is common and the rate of survival ranges from 10 per cent to 90 per cent. Nurseries produce large number of plants in sterile soils. Plants must be provided with biological needs which, under normal circumstances, are provided by nature. When the saplings are transplanted, they undergo enormous stress. Until the root system is re-established in the new soil environment, the plants are bound to suffer from the damaging effects of this stress. Many transplant failures can be avoided if mycorrhizal fungi are added, which help plants survive in a new environment are added.

The fungi also play an important role in reclaiming lands left barren by intensive mining. Tree plantation has always been an attractive option for revegetation, but at the same time, planting routine nursery saplings has been unsuccessful. Abandoned mining sites are often acidic, have high temperatures, low fertility, are poor in water storage and often contain toxic minerals. To overcome these problems, plants should be treated prior to transplanting so that micorrhizae can immediately begin to develop new roots. Newly planted trees, shrubs and ornamental plantings must quickly establish a mycorrhizal root system to begin getting their biological requirements from the new soil. Given the state of technology, inoculation is best for transplanted crops, especially in areas where soil disturbance has reduced native inoculum potential.

AMF has been a significant development in plant technology in recent times. Application of AMF by inoculation presents very different problems because these fungi only grow with their host plant. Although genetic modifications in these fungi may provide the possibility of their production in the absence of host plants in future, the classical technique will be in use for a considerable time. Expensive means of production and unreliability of beneficial effects have greatly jeopardised the mycorrhizal science. Commercial production is the greatest bottleneck in use and application of mycorrhizal biotechnology.

The researchers from JNU found a root endophyte in the desert near Jodhpur, Rajasthan, which was called for the characteristic spore morphology. This new wonder fungus improves the growth and overall biomass production of different grasses, trees and herbaceous species and can easily be cultivated on a number of complex and synthetic media.

Following the interaction with root, fungal hyphae colonises the root cortex and the fungus produces numerous spores (in chain and clusters) and vesicle (air filled structures used for food storage). The new isolate mimics a typical AMF which is uncutturable. The preliminary results show that the fungus helps in early differentiation of hard tissues into root and shoot without the addition of any hormone (chemicals). This fungus may prove a boon for tissue culture biotechnologists.

The growth-promoting property of the fungus has been patented. The time has come for the industry to patronise the break-through research and exploit it for the benefit of environment and plant health.

The social and economic potential of biotechnology, including arbuscular mycorrhizae, has been recognised and focus should now shift to improve the application of this technology.

AMF production techniques should be improved in order to produce abundant amount of homogeneous fungal material for research and experimentation.