Herbal drug quality suffering in the absence of stringent rules 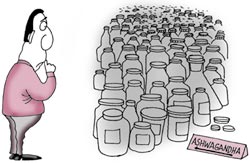 ashwagandha (Withania somnifera) is often described as the Indian equivalent of ginseng -- the Chinese medicinal plant that has captured a huge chunk of the global market. Yet the Indian herb is not a commercial success. One of the reasons for this is the lack of standards, which has led to a wide variation in the chemical composition of ashwagandha-based drugs. The discrepancy, detected during a recent study, occurs in herbal products of even reputable companies.

These drugs are portrayed as potent healers with a wide range of benefits like improving memory, cognition, stamina, vigour and resistance to diseases, as well as relieving tension and depression. But experts feel that in view of the latest findings, a huge question mark hangs on the efficacy of these medicines.

The study was published in the February 2004 issue of Current Science , a journal brought out by the Indian Institute of Science, Bangalore. Entitled 'Phytochemical variability in commercial herbal products and preparations of Withania somnifera ', it was conducted by three institutes of the Council of Scientific and Industrial Research (csir) -- the Central Institute of Medicinal and Aromatic Plants (cimap) and National Botanical Research Institute, both in Lucknow, and the Regional Research Laboratory in Jammu.

During the study, the amount of withaferin a -- one of the withanolides of ashwagandha -- was analysed in 10 products being sold in the market (see table: Under the scanner). Withanolides are secondary chemicals produced by the plant. The scientists assumed withaferin a to be an indicator of the presence of ashwagandha. They found that the amount of the chemical per gramme of ashwagandha varied from 100 per cent to merely 0.9 per cent. In nine of the products, the quantity was less than 50 per cent.


The research highlights these inconsistencies to underscore the importance of standardising herbal products. It also points out that the anomaly can only be corrected through stringent legislation, which doesn't exist in the country at present. Several factors like sources of raw materials, harvest and post-harvest conditions, and processing and manufacturing techniques have to be regulated for controlling the quality of herbal products. But the Drugs and Cosmetics Act, 1940, which governs the herbal medicine industry, only lays emphasis on making drugs in clean factories and testing raw materials for genuineness.

G S Lavekar, director, Central Council for Research in Ayurveda and Siddha, under the Union ministry of health and family welfare, says: "Parameters such as chemical and biological markers should be set so that an acceptable range can be established for chemical constituents."

R S Sangwan of cimap, a member of the study team, suggests that ashwagandha should be marketed as a single plant product and not a traditional medicine where a combination of plants is used. While modern scientists are in favour of identifying active ingredients in herbal products and using them as medicines, conventional practitioners believe that such isolates cease to be traditional medicines.

The report has evoked a mixed response from the industry. Some companies are of the opinion that the laws should be strengthened. At the same time, there are others who claim their products are up to the mark. Paranjay Sharma, president of Shree Baidyanath Ayurved Bhawan Private Limited, says a manufacturer can only be penalised if standards exist. He feels quality control should be introduced in the production process at the raw material stage itself. Significantly, the good manufacturing practices that are stipulated currently do not deal with this aspect.

S K Mitra of Himalaya Drug Company says his company uses chemical indicators to ensure that even products in different batches conform to a uniform standard. Further, it conducts trials on humans to ensure the efficacy of the drugs. A senior representative of another manufacturer implicated in the study asserts: "The researchers did not find the withanolide because it could have been masked by other chemicals present in the product." Sharad Goel, spokesperson for Dabur, says: "We believe that the researchers should have estimated total withanolides, which is a widely accepted biological benchmark, for the purpose of comparing different products available in the market."
Herbal Medicine Medical Research India Drug Industry Drug Industry Drug Industry News News News Web edition Web edition West Bengal … Urban development … Trinamool Congress … Transport secretry … Kolkata Cycle Arohi … Kolkata KCAAJRC Down to earth DCP traffic Dilip … Cycling ban Civil society group …
Donate Now